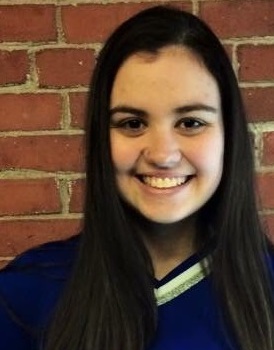 From baking apple pies to waiting on husbands hand and foot, the image of the 1950’s perfect housewife doesn’t appear to be going away anytime soon. However that image is not reality. Today the Department of Labor estimates that 70% of mothers with children under 18 are participating in the labor force. So what has lead to this shift and have attitudes changed as women have moved into the labor force? Not too long ago mothers were only seen as homemakers, and now more than half work full or part time. Have the women of the generation that lived through this stereotype been replaced by the progressive women of today? To answer this question we can look at the data collected by the General Social Survey on attitudes towards working mothers. 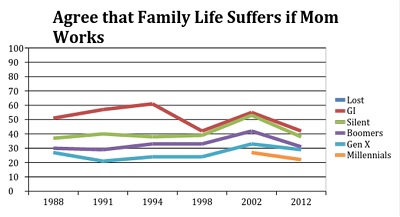 The graph shows us a breakdown by generation of respondents that agreed that “… family life [will] suffer if the mom works full time?” The difference by generation is clear. Those in the oldest generation, the “GI”, born between 1901 and 1924 agree that family life will suffer more than those in other generations. This is in contrast with the youngest generation, the “Millennials”, born between the 1980’s to the early 2000’s. The data shows that when asked, the “GI” generation agrees nearly twice as often as Millennials. Also when looking at the graph as a whole we see that all the generations are disagreeing more in the last 10 years. So what does this mean for the future of working moms?

As the older generations begin to die off and the younger ones grow up, I believe there will be an even larger increase in working mothers. The societal norm is changing and the stigma surrounding childcare are becoming less and less. The factors that may play into this are plenty. The passing of the Family and Medical Leave Act of 1993 allows women to take jobs and then have children without fearing that their job will be lost. The economy has taken a downward turn in the past few years, which may have lead to more economic pressures on families. For the future this might mean paid maternity or even paternity leave and with more women in the work force, equal pay or job opportunities. Telecommunications giant, Vodafone, has been one of the first to take steps in the direction of paid maternity leave. They recently announced they would be giving a minimum of 16 weeks leave to all new mothers who work for the company in any of the 30 countries Vodafone operates in. Some states have also taken on the issue. California passed a paid paternity leave law that offered 6 weeks at 55% of pay for both mothers and fathers. New Jersey and Rhode Island followed California’s efforts soon after. While efforts are being made on company and state levels, a national program is the way of the future, so all working mothers are given the same benefits. The goal for mothers will no longer be fulfilling the role of the perfect housewife but to find the balance between working and being a mother.