Hello! My name is Maggie Daly, and I am a senior here at Wheaton College. I am a double major in Psychology and Visual/Studio Art, with a particular interest in nonhuman animal behavior and cognition. I volunteered for/apprenticed with Donna Perrin, a VT Wildlife Rehab permit holder. She works from Creek Road Farm Wildlife Rehabilitation in Middlebury, Vermont.

I loved being able to combine so many interests and passions into a single apprenticeship experience. Along with my interests in animal behavior and cognition, I am also interested in how humans can use this information to both learn about and help critters in their natural habitats. I have wanted to get my VT Wildlife Rehab permit for years now, and this was the perfect opportunity to work towards it. Learning about animals both as species groups and specific animals was so powerful, because there is always a need to know about the natural history of an animal AND a need to cater to individual needs. It was exciting to be learning as I was doing, which allowed me to feel like I was truly becoming part of the VT rehabber network.

My hands-on jobs included cleaning enclosures and medicating and feeding/watering animals. I was also able to take part in some building of enrichment for them in order to keep them curious! Outside of actively volunteering, I visited a few other rehabbers, and read as much as I could (my main resources have been the NWRA Principles of Wildlife Rehabilitation and Wild Mammal Babies! The first 48 hours and beyond by Irene Ruth and Deb Gode).

Every minute spent with the animals was amazing. However, two main milestones do stand out. The first was when I finally finished my rabies vaccinations and was able to work directly with the raccoons! Three orphans had come in later in the season, so I was able to help with their bottle-feeding. The second milestone was my first release: Donna and I cared for 7 of a litter of 11 orphaned opossums that we were brought in, and I was able to be a part of their journey from the day after they were found to the day they were released. It was hard to let them go, but also incredibly rewarding to see them all wander off in their separate directions.

It was an incredible opportunity, and I am looking forward to finishing my own permit application soon. I will then be able to take in orphaned animals on my own, aiding in their survival and/or comfort. 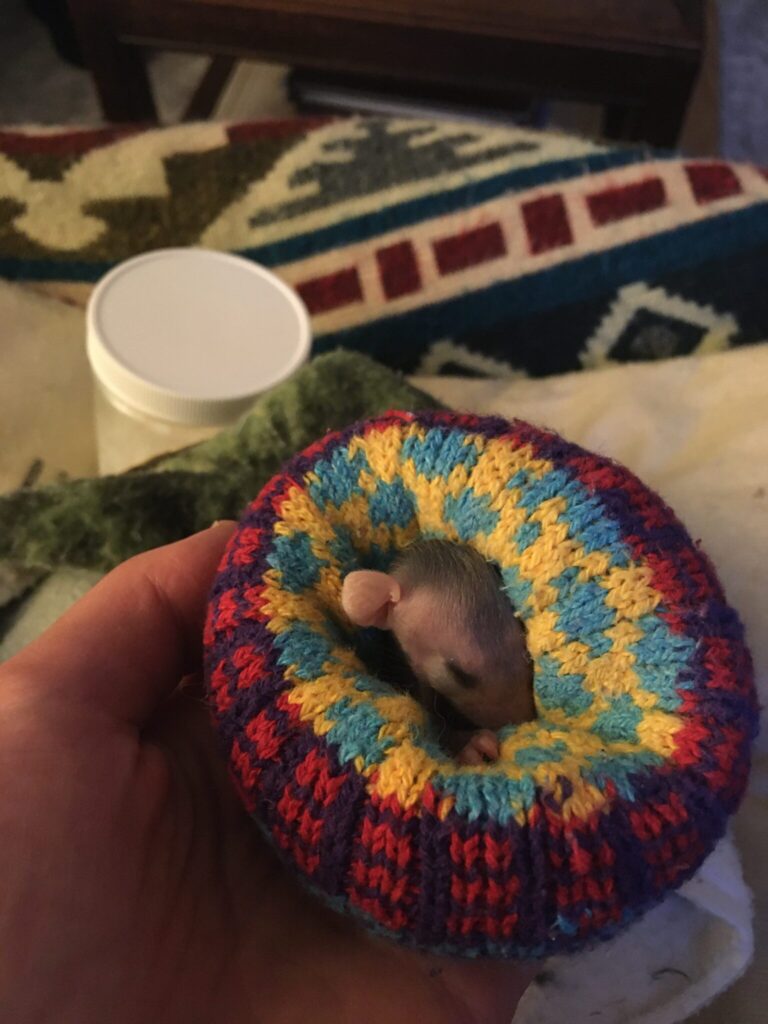 A week-old orphaned opossum stays warm in a sock while I feed and medicate her.
This litter did not survive, as they were not found and medicated soon enough. The mothers milk becomes toxic after she dies, and these babies were still in her pouch and eating when found on the side of the road. We lost one other litter as well, of two individuals. They were humanely euthanized because of a severe calcium deficiency that could not be reversed. 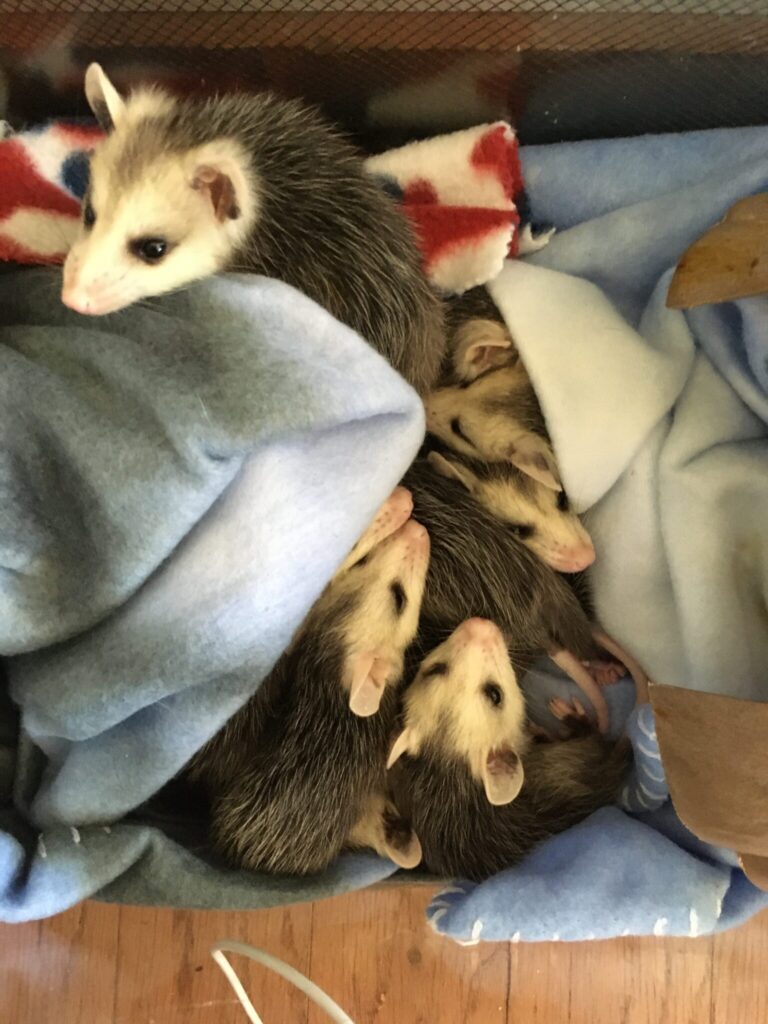 Opossums a few weeks old explore and try to escape their enclosure.
At this point, they truly have minds of their own and it’s hard not to play with them! However, they are wild animals, so distance is needed to make sure they are able to survive when released. 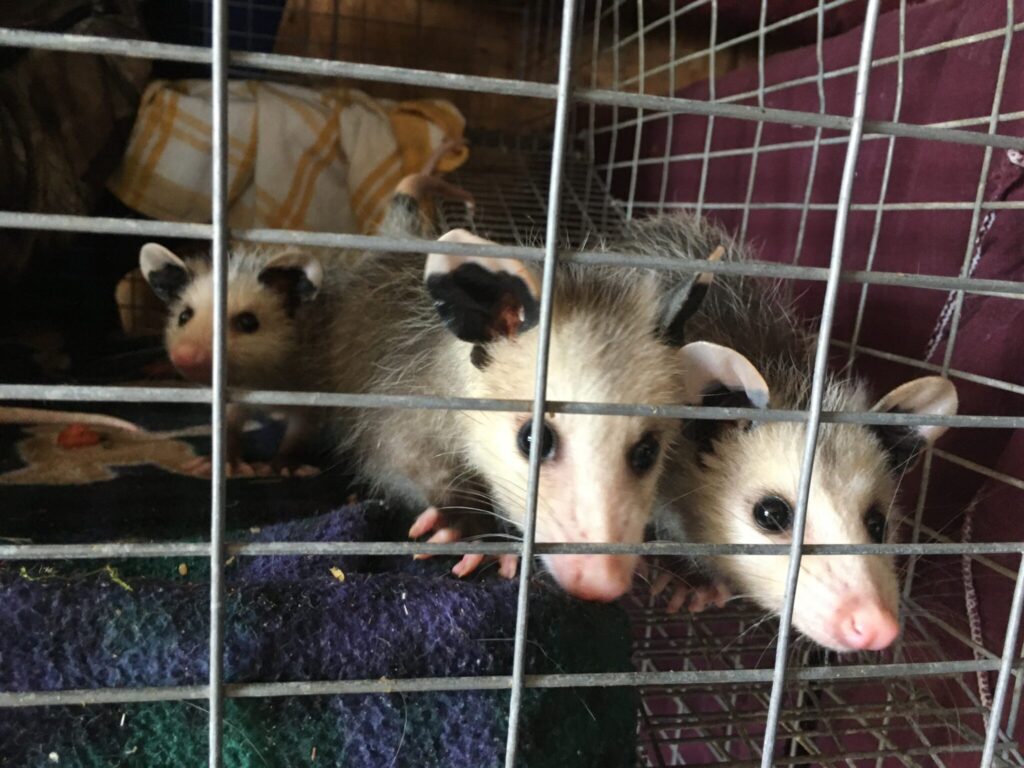 Closer to release!
These three opossums, from the first litter we took in, had been moved at this point to an outdoor– but sheltered– enclosure. At this point they are a few weeks away from being released, as it is based on body size. They are being weaned off milk and getting solid foods! Their favorites include vanilla bean greek yogurt, crusty bread, and watermelon. Whenever they get time out in the grass, they immediately dig for and eat insects. It’s in their nature! 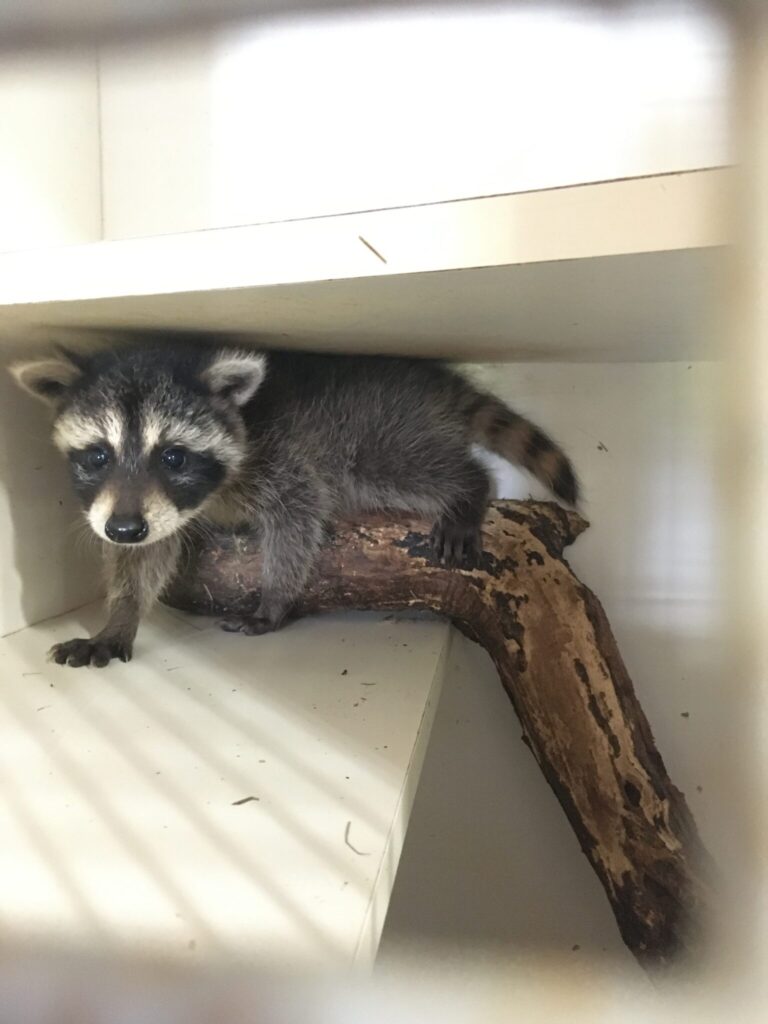 A young raccoon is coaxed out of his enclosure.
Animals are removed for bottle feeding, as well as to clean their enclosures. A clean enclosure helps keep animals healthy and comfortable, decreasing likelihood of infection. Hard surfaces like the floor and walls, caging, litter pans, food/water dishes, and toys are scrubbed clean, and cloth bedding items such as towels and blankets are laundered. Raccoons napping belly-up. Although enrichment is crucial for raccoons (they are curious and their “fingers” are very dexterous!), they are nocturnal and are usually sleeping until we come in to clean. It’s amazing how fast they can go from playing to sleeping, and then back to playing again! 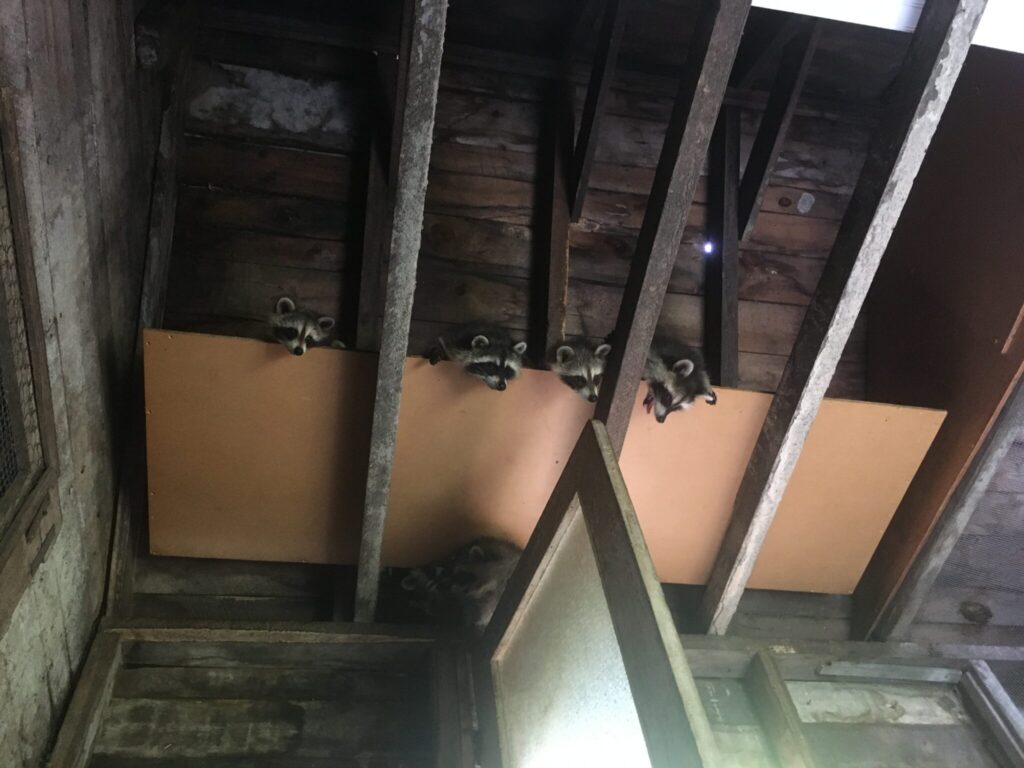 Older, larger raccoons are moved to an indoor/outdoor enclosure that is much more roomy.
They sleep in the rafters during the day, but often wake up and are curious when we come in to clean! 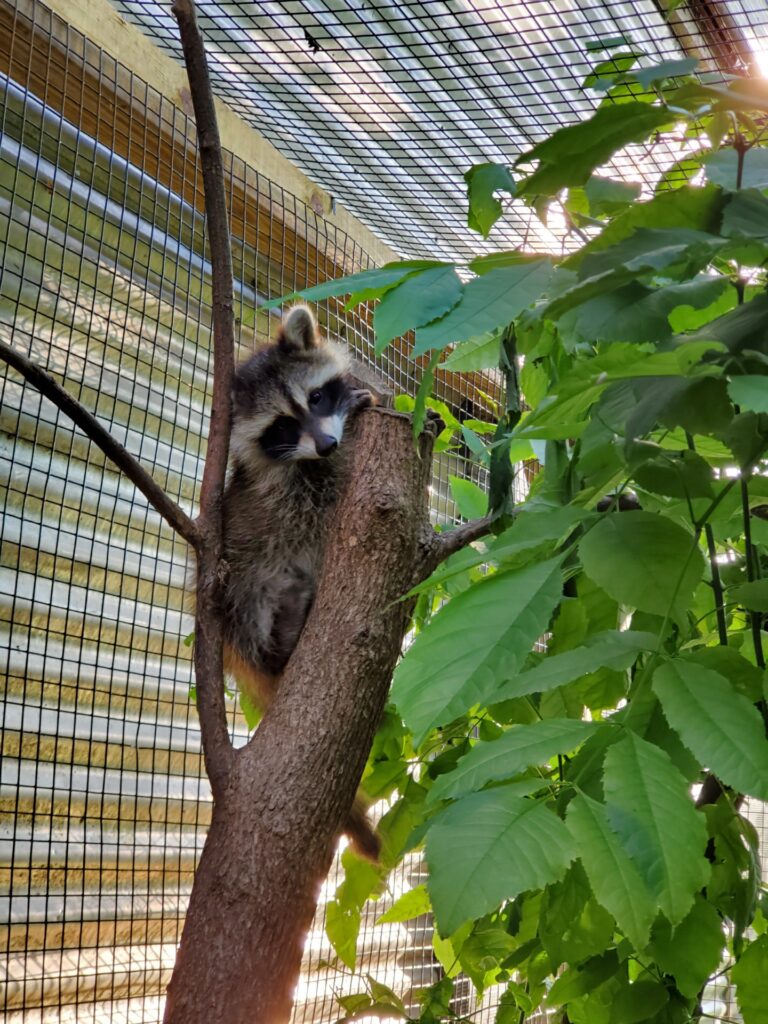 Raccoons in the indoor/outdoor enclosure quickly better their climbing skills!
Although all the enclosures have access to climbing, there is much more opportunity here for them to practice. Inside, they climb the hardware cloth up into the rafters. When they work up the courage to wander outside, they climb the hardware cloth and the tree they have access to. When they are ready for their release, the roof of the outdoor portion is removed and they climb out when they are ready. this is called a soft release.