One-hundred years ago, the world was at war. And these eyes ask us across time: would we remember?

For the past decade, Wheaton College Professor of Computer Science Mark D. LeBlanc has been on a quest to answer in the affirmative: “yes, we do remember.”  LeBlanc researched the span of three years in the lives of the New England men who left their farms and families, traveled to France, and fought in what we now call the “The Great War”, “Le Grande Guerre”, “World War I”, “The War to End All Wars.” 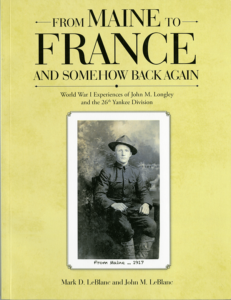 In honor of the 100-year anniversary of the end of the war, LeBlanc recently published From Maine to France and Somehow Back Again: World War I Experiences of John M. Longley and the 26th Yankee Division (Lulu Publishing, 2018), detailing the life of John M. Longley and his legacy of playing a part in a worldwide cause that was much bigger than life on a farm in rural Maine.

The account traces the path of the farm boy, John, and his fellow New Englanders who enlisted and traveled to France where they fought on the western front in 1917-1918. LeBlanc’s research began with the rediscovery of a cassette tape that stored 28 minutes of an interview between LeBlanc and his maternal grandfather, a WWI veteran. Longley’s first person accounting of his time during WWI were the scaffolding for a decade of research in local historical societies and newspapers, original war documents in the National Archives, and a month-long romp through France to stand in the exact places where the men lived and fought. From Maine to France was shared first as an eBook with links to Google maps and audio clips from his grandfather dispersed throughout the telling of the story, for example, of “that damned artillery“.

Halting the last German drive for Paris at Château-Thierry: “that was a rough one.”

LeBlanc was experimenting with new ways that we read with eBooks by designing the maps in the story to be much more than “rectangles on a page”. The maps in the eBook are linked to Google Maps, allowing the reader to explore inside the maps, including “going street view”.  For readers of the print edition, audio interviews are available on the author’s Vimeo channel, WWI.

For John Longley and his mates, most who had never left the State of Maine, Wilson’s call for men in April 1917 found them answering the hometown whistles that called for men. Starting with hometown and regional enlistments, the New England men mustered in Massachusetts, formed part of the American Expeditionary Force’s (AEF) 26th ‘Yankee’ Division, shipped out of Hoboken, NJ (part of first American National Guard unit organized as a division in the United States and transported complete to France), trained in Neufchâteau, France, and soon found themselves fighting in numerous engagements on the western front, including action at Chemin des Dames, Toul, Xivray, halting the last German drive for Paris at Château-Thierry, and offensive actions at Saint-Mihiel and Verdun.

“During the nine months of service from February 6, 1918, the division spent only ten days in a rest area (just prior to the St. Mihiel Offensive), the balance of the time consumed in moving from one sector to another, or in support position awaiting entry into the line.” (p161)

LeBlanc’s historical and eBook research intersected with Wheaton College’s history and his teaching, LeBlanc teaching first year seminar students to write and build their own eBooks in 2015. Former Wheaton College Archivist Zephorene Stickney Helmreich shared wartime letters from Wheaton alumna Eleanor Kilham, M.D., class of 1876 who served as a doctor from the war’s outset. A number of excerpts from Kilham’s letters home are included in the book, including ““The apple blossoms are in full bloom, such a contrast to the destructive work of man” and later she wrote, “Everything in nature is so lovely, that the misdeeds of men seem doubly hideous.”  Leah Niederstadt, Assistant Professor of Museum Studies & Curator of the Permanent Collection at Wheaton shared WWI French recruiting posters that had been donated to the College years ago and two of the posters are included in the book.

A line in the Wheaton Hymn we sing each year at ceremonies and commencement says it well:

To John Longley and the men and women who sacrificed so much, LeBlanc’s story says: “We remember.”

“From Maine to France and Somehow Back Again”