It is with very mixed emotions that I announce the retirement of Zephorene Stickney Helmreich, effective August 10, 2018. Zeph’s leaving marks the end of a 38-year era for Wheaton, as she was the college’s first full-time archivist, and has stewarded and curated our wonderful collection of both institutional and rare materials nearly from scratch. We are indebted to her vision and commitment; Zeph has documented and organized Wheaton’s distant and present history like no one else.

Zeph came to Wheaton in 1980, after working at the Archives of the Commonwealth of Massachusetts (when it was still in the State House!), the Schlesinger Library on the History of Women in America, the State Archives of New Hampshire and the New Hampshire State Historical Society. Zeph first heard of Wheaton College while a student at Mt. Holyoke College (did you know that they claim that Mary Lyon is actually buried at Wheaton?).

While people credit Zeph with “creating” the Archives and being the first archivist, Zeph humbly notes that she actually “inherited” the Archives from Ruth Andrews Fletcher ‘35, who moved the existing collections into the current location while the Library was being renovated and expanded in 1979/80. Before Ruth and Zeph, Grace Shepard, professor of English and compiler of the unpublished 1931 “History of Wheaton College,” was named as the first archivist, a more or less honorary title.

Zeph arrived at Wheaton just as plans for the 1985 Sesquicentennial were beginning, and worked with Ann C. Caldwell, vice president for resources (the original name of the Advancement division), who understood the importance of history to both the Sesqui financial campaign and celebration. Zeph’s first five years were devoted to answering administrative queries, planning for and participating in the varied activities of the Sesqui, discovering archival materials in offices and attics, and providing Paul Helmreich, then professor of history and later college historian, with access to the archives and research assistance as he wrote the history of Wheaton’s seminary years. 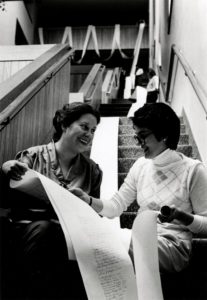 1984. Zephorene L. Stickney (left), College Archivist and two unidentified individuals holding the Sesquicentennial Scroll in the library stair tower. The scroll was made available for signing by visitors at every Sesqui event during 1984/85, thus its great length!

The first part-time Archives staff-member was hired in 1985 at 10 hours per week. The number of hours rose and fell, but the first full-time associate archivist was Deanna Olson Hauck, who served from 2007–2011, and instituted our Records and Information Management program. Megan Wheaton-Book served as assistant archivist from 2012–2015, building on that program. Zeph began part-time work in 2016/17, and Mark Armstrong, our current archivist and records manager, began in 2017. Through all these years, student assistants have been the backbone of the Archives, processing, re-shelving, researching, and working on special projects.
The collection has more than tripled in size since 1980. Large portions of the archival collection, both permanent and non-permanent, are stored off-site, allowing us to maintain the most frequently used materials on-site. Zeph was careful to add to Wheaton’s special collections of non-Wheaton-related objects and manuscripts, as she affirms that object-based inquiry adds to any student’s understanding of the context of textual research.

When Zeph arrived, all of the special book collections, with the exceptions of the Cole Memorial Collection (now located in the Cole or “Harry Potter” Room on the First Mezzanine in the Library) and Seminary Library Collection (in the Library’s Merrill Room), were shelved in the Archives. As the archival collections grew, book collections that were used infrequently were moved to other locations in the Library. Helen Wann Piper ‘39 created an endowed fund to support the most frequently used book collection, the Historical Collection on Women; consequently, it has grown the most. Zeph has used both the books and Archives in class presentations, so that students will understand that books and magazines can be primary sources as much as documents.

In addition to all of this, Zeph was the secretary of the Norton Historic District Commission for more than 25 years. Her serving in this role aided in relations with the town of Norton, and provided wonderful context to so many materials in the Archives collection. She  also co-chaired the Staff Council early in the history of the Staff Association, making sure the group was on solid footing to contribute to and help our community to this day. 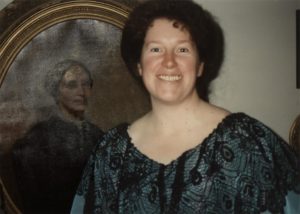 Zeph not only enjoys but also is the best “pro” at presenting primary sources—be they documents, photographs, books, clothing or other objects—to students and all other visitors. Zeph writes, “To see a look of surprise or delight (the proverbial ‘light bulb’) overcome their sense of the ‘ordinary’ is pure delight.” She notes that the greatest challenge has always been balancing the many responsibilities of the position—from antiques to rare books to space for the collections to thinking about digitizing it all for future access.

Perhaps the most lovely part of Zeph’s story is that Zeph and Paul Helmreich were married in 2016, following 36 years of friendship. She notes that marriage with Paul is “actually, my greatest reward!”

Zeph is a dear friend to me and my family, a confidante, and a mentor. I met her personally during the fall semester of 2004— my senior year (after visiting the Archives with at least three of my classes)— when I brought her a well-loved nineteenth century book of letters from the Library’s circulating collection. This book was just what I needed when I was feeling at sea facing my senior year (Class of 2004) and life beyond Wheaton: it features letters between John Sullivan Dwight, one of nineteenth century-Boston’s most influential patrons of classical music, and George William Curtis, the man who donated land where my high school was built on Staten Island. I first lovingly wrapped the book in tissue paper to protect it from the jam-packed contents of my backpack and brought it to Ann Sears (it was for an American music history course; I was writing a paper on Dwight), who with her distinct smile and knowing twinkle in her eyes, told me to immediately make an appointment with Zeph. Ann encouraged me to tell her I was interested in learning from her methods of book conservation; I wanted to do what I could to repair the binding before returning it, as I was worried I would be fined for destruction of property. (I was oh-so-thorough even back then.) Coincidentally, Ann and Zeph began at Wheaton on the very same day!

Without meeting Zeph and her encouragement to me to explore film and music archives, I doubt that I would have had the courage to apply for my final Wheaton internship at the John F. Kennedy Presidential Library and Museum, which later turned into a job, which later turned into another job and then graduate school (a time throughout which I consulted Zeph for advice)… and eventually led me back to Wheaton. It’s a story full of schmaltz— even more than a Perry Como song (a favorite of Zeph’s, as he sings in “her range”) — but it couldn’t be more true.

Thank GOODNESS Zeph has agreed to return to the Archives to volunteer, consult, and counsel. (We’ll allow her to take a few weeks of not setting her alarm clock to come in.) Mark Armstrong, our Archivist and Records Manager, has rightly stated time and time again, “Zeph has already forgotten more about Wheaton than we will ever know.” Again, we are indebted to Zeph’s vision, advocacy, persistence, mentorship, and her meticulous and dogged record-keeping. Wheaton would be lost without her.

We will be celebrating Zeph on August 9, 2018 in the Library from 2:30-4 p.m where she will officially be named College Historian. Please stay tuned or be in touch with Kate Boylan (boylan_kate@wheatoncollege.edu) for more details, and in the meantime, send your best to Zeph (stickney_zephorene@wheatoncollege.edu).