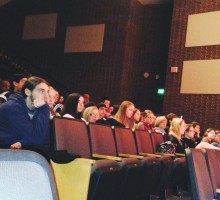 More than 90 NHS students in attendance

On February 23rd, the Office of SSSR worked in collaboration with Combined Jewish Philanthropies, Israeli Roundtable, Hillel Council of New England, and the Jacobson-Banks Fund to help bring Sivan Ben-Yishai’s play, Never Ever Ever, to students at Wheaton College and the Norton High School.

Skillfully performed as a one-man show by Jordan Ahnquist, Never Ever Ever tells the story of a boy named Yoni as he struggles through the challenges presented by his learning disability. Conflict arises when Yoni is given a project at school that could potentially expose his difference – a part of him that he has tried incredibly hard to keep a secret all his life. Audience members are offered an exclusive seat into Yoni’s mind as he works to try to shape and come to terms with his new identity at such a critical age in his life.

While Never Ever Ever allows for audience members to see the internal conflict that comes with being labeled as different or “the other,” the play simultaneously sheds some light onto Israeli culture at a time when it has been so negatively targeted and portrayed by the media.

Never Ever Ever was produced by the Israeli Stage, a theater company whose Director and Producer, Guy Ben-Aharon, initially started the company as a way to celebrate and share Israeli culture – especially with younger audiences – in an innovative way. He wanted to share Israel with the world through the performing arts. Interestingly, instead of ushering audiences to his stage, he delivers the stage to his audiences by sending performers to college campuses. The Israeli Stage has performed at over 20 college campuses in the Northeast region of the United States. It was the first time that the Israeli Stage performed for a public school when they brought Never Ever Ever to Norton High School.
After each performance, the cast and crew quickly shuffle up to the stage in order to facilitate a “talk back” session where audience members have a chance to discuss the subject matter and ask questions. 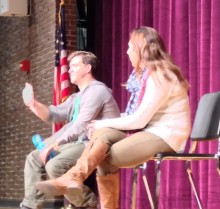 Wheaton’s very own Molly Tobin, Class of 2012, facilitated the talk back sessions at the Norton High School as well as at Wheaton. Molly works as the associate producer for Israeli Stage. After each performance, students delightedly shared their enthusiasm for the show and how much they connected to different pieces of it. Some students even approached Mr. Ahnquist, the show’s sole actor, to tell him just how impactful his performance was to them. Because of the universal tendency for all people at one point in their lives to feel like “the other,” Yoni’s character was comfortingly relatable. Even a few Norton High teachers chimed in during the talk back to commend Mr. Ahnquist’s acting as well as to show their appreciation for the performance.

Five Norton High School teachers brought their classes to see the performance on a Monday afternoon during their last period of the day. More than 90 students were in attendance. The production was then performed on Wheaton’s campus later that night. By the end of the day, roughly 120 students and members of the Norton community enjoyed the performance.