Kiran Pfitzner ’21 and Casey Smith ’20 each won Outstanding Delegate in their committees, while Lucy Raleigh ’22, Valery Leon Quintero ’23, Ethan Fabing ’22 and Amber Wright ’20 earned Honorable Mention for their roles in discussions that ranged from how best to defend the city of Zion in the “Matrix” film universe to how to carry on in the Soviet Union after the 1953 death of Joseph Stalin.

“Words can’t describe how proud we are of our team’s performance this weekend at CIAC,” co-head delegate Wright wrote in a Facebook post. “Taking home six awards (the most we’ve ever won at a conference) and a burning desire to keep succeeding, we’re excited for the rest of the conference season.”

At the conference, held November 7–10 at Cornell University, students split into committees to debate a wide range of topics referencing history, pop culture and current events.

“I think my personal interest in military history, along with my familiarity of Soviet ideology through my Russian history class helped me stand out,” Pfitzner said.

Smith, a double major in history and Russian studies who serves as the team’s co-head delegate, acted as a representative of the Fire Nation in a crisis committee set in the world of the animated TV series “Avatar: The Last Airbender.” She said the committee was a fun study of pop culture, military logistics and governmental structure.

“I think I stood out in the debate because of my (maybe over-the-top) commitment to my character,” she said. “I initially played the head of a secret police force, so naturally, I focused most of my efforts on amassing power to create my own military. I had a lot of intricate plans going on in the backroom like creating religious schisms, plotting coups, and sabotaging the other side’s military.”

Raleigh, a double major in political science and women’s and gender studies, served as a councilor in the “Matrix” committee, based on the film series, and credited her success to her speaking, writing and collaboration skills, as well as her ability to adapt and steer debate.

Wright, a double major in international relations and sociology, was part of a committee set in the fictional film world of “Mad Max: Fury Road,” in the role of post-apocalyptic leader Immortan Joe.

“It was by far the strangest and most fun role I’ve ever played,” said Wright, who typically seeks out political committees, especially those focused on Latin America, but opted this time for a less traditional topic. “I think I stood out because I was able to give calculated and amusing speeches while also building my character a really strong arc that swayed the committee.”

The team also competed in the Boston Area Model UN Conference in October and next will attend Harvard National Model UN in February and Five College Model UN at Mount Holyoke College in March. 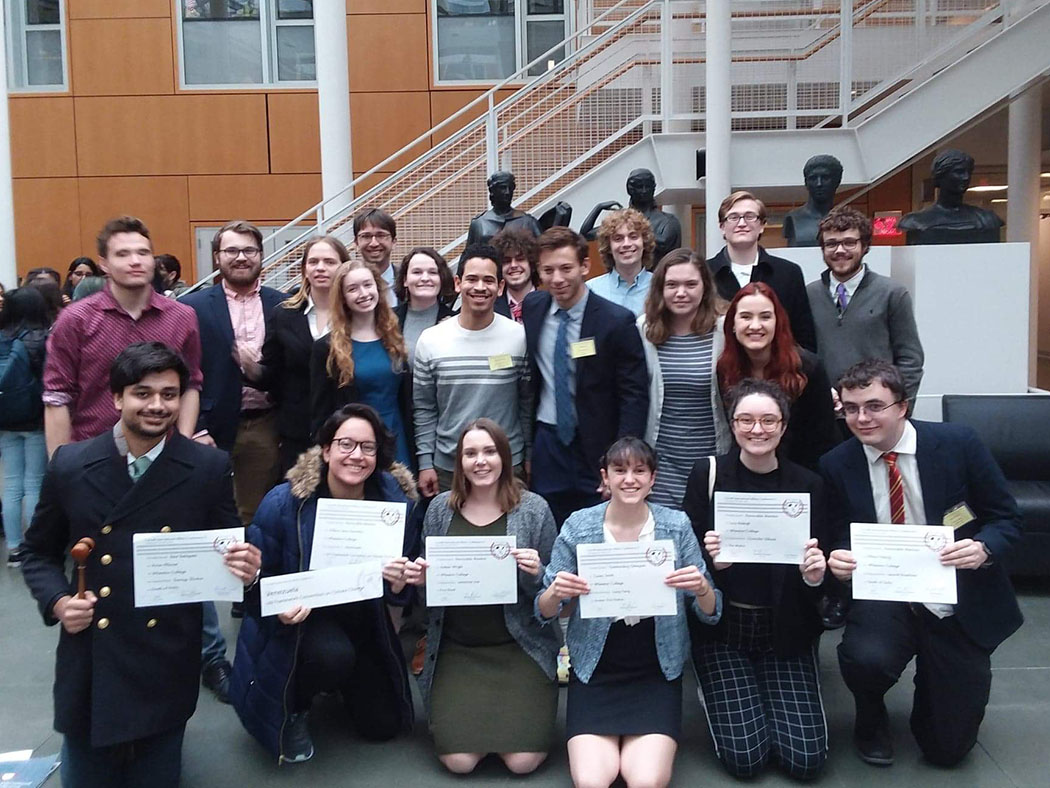