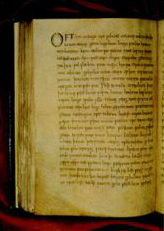 In this talk, Michael Drout will introduce the “adaptive landscape” (an idea taken from biologist Sewall Wright) and show how it can be used to understand the evolution of literary genres. To explain the dynamics of cultural evolution, Drout modifies the adaptive landscape, drawing upon processes of categorization and prototypicality as described by cognitive psychology.  Drout will test this theoretical approach with the short Anglo-Saxon poems found in Booklet II of the Exeter Book.  These poems can be seen as  early stages of an adaptive radiation into cultural space opened up by the tenth-century Benedictine Reform.