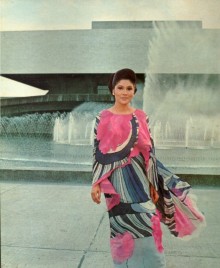 How does melodrama shape cultural policy? And how does cultural policy generate “melodramatic” political outcomes? In this talk, Talitha Espiritu will revisit the conjugal union and political partnership of Ferdinand and Imelda Marcos, and how the melodramatic imaginary of this romance facilitated the founding of the Cultural Center of the Philippines. From this social script, she will trace the two competing rationales of the Marcos regime’s “melodramatic cultural policy”: the normalization of the “folk” into tasteful citizens and the revaluation of the identities and cultural practices of disempowered Filipinos. Espiritu will further explore how the Center’s controversial excesses fed the melodramatic cultural politics of the anti-Marcos opposition.

The talk will be presented by Talitha Espiritu, Assistant Professor of English and is scheduled for Tuesday, April 16th at 12:30 p.m. in PDR.