New countries make new men: race, hyper-masculinity and the (un)making of the Irish as American in Edward Harrigan’s the Mulligan Guard Ball 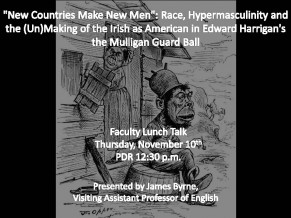 How the Irish became white, to quote Noel Ignatiev’s title, may have had far less to do with race and far more to do with gender. I am currently in the middle of doing research on the possible part gender played in the cultural conditioning of the post-famine Irish immigrant as neophyte American. I hope to (re)complicate the often reductive argument about the role race played in the reproduction of the Irish as American in the late nineteenth century, and would love to talk to you, and to hear any opinions or advice you have on this.

The next Faculty Lunch Talks is presented by James Byrne, Visiting Assistant Professor of English and scheduled on: