The book as a whole transitions to a postnational understanding of Hispanic literature, examining how the nation, the most important vehicle for culture, has been debilitated by globalization and 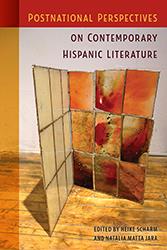 The recent presidential election highlighted the ideological division between isolationists and globalists in U.S. Latin America. The Caribbean, more specifically, offers an interesting example of how this dichotomy can be interpreted as a false either/or choice. Additionally, Argentina is home to a party which desires increased self-sufficiency. While they are economically isolationist, they are culturally and policy wise, internationalist, says Fernandez de Alba.

In his chapter, Fernandez de Alba argues that patriotic nationalism and cosmopolitanism are not opposite terms when it comes to art. In fact, there are ways of exploring national identities and imaginaries that benefit from mixed approach. He explains that “[in] studying the cases of Cuban writer Virgilio Piñera and painter Wilfredo Lam, my chapter illustrates how these artists were cosmopolitan in their life experiences and techniques, and locally postnational in their challenge to a homogenous and exclusively white representation of Cuban culture. Fully aware of the struggle to construct a postcolonial Cuban culture, Piñera and Lam opted during the 50’s and 60’s for an inclusive art that could reflect the ethnic and racial diversity of the island. To that end, they used modernist techniques with Cuban themes to develop unique and recognizable art.”

While the chapter focuses on the techniques they used and the essays they wrote, de Alba emphasizes the fact that Piñera was openly gay and Lam was an Afro-Chinese biracial Cuban. Both were abroad for extended periods. Piñera worked in Cuba’s embassy in Buenos Aires and Lam lived and worked in Spain. Lam would end up fighting in the Spanish Civil War before moving to Paris where he befriended Picasso. The Nazi invasion of France, made him move back to Cuba and later to New York City. Thus, “we safely speculate that this experience gave them strong cosmopolitan views that influenced the way they saw Cuban national identity and the contributions of art to making an inclusive national imaginary” says Fernandez de Alba.

After independence, Latin American nations leveraged their culture to build a unique national identity separate from the metropolis. Fernandez de Alba elaborates, saying “Intellectuals, authors, and artists were co-opted into this project, charged with finding the national essence so it could be distilled and sublimated into their art. This was no easy task in countries with the complex ethnic and racial diversity of Latin America. Artists that did not set to that task, artists that had an internationalist or cosmopolitan approach, were often excluded from the national canon or, at the very least, pushed to the margins.”

Fernandez de Alba’s work contributes to its field by questioning the way national artistic canons are constructed. His work suggests a third way that does not require an artist to be “truly Cuban” or cosmopolitan.“As both nationalist and cosmopolitan citizens,” Fernandez de Alba said, “Piñera and Lam offer an example to reconsider the categories we have used to study Latin American culture.”

He continues to finish his own book which examines the long transition to democracy in 1970’s Madrid, exploring such topics as urban planning, sex and gender, recreational drug use and fashion to demonstrate the ways in which Spanish citizens, even under the military dictatorship of Franco, developed a democratic consciousness.

The article can be found at  “Cosmopolitan Postnationalist: The Case of Virgilio Piñera and Wifredo Lam”; Postnational Perspectives on Contemporary Hispanic Literature, University Press of Florida, 2017.