Jeanne Wilson, professor of political science and Russian studies, published “The asymmetry of China-Russia Relations” in the online journal China Policy Institute this past week.

Wilson outlines the current status of China-Russian relations for the average reader.

Contrary to widely held beliefs, the China-Russian relationship is distinctly asymmetrical. While there has been some measure of convergence and equilibrium, China’s ambition and rise to power have placed it in a position distinctly apart from declining Russian power and influence. 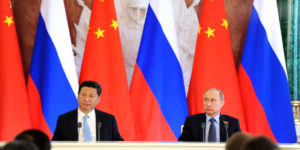 Wilson writes, “the Kremlin is also acutely aware that the Chinese economic juggernaut poses a threat to Russia’s perceived sphere of influence in the post-Soviet space, especially Central Asia.”

Subsequently, the Kremlin has found itself acquiescing to Chinese demands, overt or not, even when they are not clearly beneficial to Russia’s political, economic, and social position.

Wilson concludes that, “to date, the Chinese leadership has largely treated Russia with the respect accorded an equal partner. Nonetheless, the relationship is becoming increasingly asymmetrical. Russian president Vladimir Putin has arguably been quite successful in playing a weak hand to its best advantage. But Russia lacks the capabilities, especially in the economic sphere, to command an equal presence with China. It is China, not Russia, that will determine the future course of this relationship.”

Professor Wilson is currently on sabbatical for the Spring 2018 semester and is conducting research.