“It is with words as with sunbeams–the more they are condensed, the deeper they burn.”–Robert Southey

Summer is a time of ambition for academic librarians: when students are away doing research, undertaking internships, or working summer jobs, library staff update cataloging backlogs, refine subject guides, and tackle special projects. This summer, the Marion B. Gebbie Archives and Special Collections is in the process of identifying pre-1801 books printed in the British Isles or territories governed by Britain, in all languages. These books will soon be added to the English Short Title Catalog (ESTC), a British Library-hosted, shared, online catalog containing the holdings of over 2,000 rare book collections worldwide. It was this project that led to the discovery of a rare book belonging to Robert Southey, former Poet Laureate of England.

Upon Southey’s royal appointment in 1813, he commissioned Thomas Bewick to create a bookplate, pictured above, to be laid into every book in his personal library. Bookplates, inscriptions, bindings, and annotations serve as forms of evidence of provenance, an area of major research for Wheaton students. The book at Wheaton which he owned is a 1653 imprint of The History of the Warres of the Emperour Justinian, one of just thirty copies identified in the ESTC. The Wheaton copy is known as a sammelband, a portmanteau of German words meaning “to gather” and “bind:” it is one of several works gathered together in one book binding. The History of the Warres is bound with a 1609 copy of The Roman Historie by Ammianus Marcellinus. Wheaton’s copy lives as part of The Smart Collection, a special collection of rare, fine press, and finely bound books collected by Paul H. Smart, member of the former Library Visiting Committee and son of Wheaton trustee and former Acting President Reverend Dr. George T. Smart. Donated to the library in 1967, the Smart Collection contains several volumes owned by notable collectors, scholars, and titans of industry, ranging from Robert Frost to Junius Morgan, bibliophile and nephew to J.P. Morgan.

There are a few other historical clues scattered throughout the book. A bookplate belonging to D. H. McAlpine appears inside the front cover of the book—perhaps the person who had the two works bound together as one. Additionally, the inscription “Terwhitt Gibson’s book” appears scrawled in the margins of the frontispiece of The History of the Warres of The Emperour Justinian. Many thanks to Peter Kidd, @mssprovenance [Twitter], who identified this as “Terwit Gibson” who married in 1727 at Halloughton, Nottingham, and the “Tyrwhatt Gibson” who was buried in 1761, in the same place. Southey, McAlpine, and Mr. Gibson’s chains of custody provide a rich source of historical data for student research. 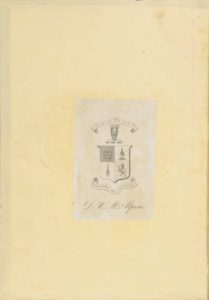 The bookplate of D. H. McAlpine.

The inscription of Tyrwhitt Gibson.

Notably, Southey was mocked mercilessly by Lord Byron. Byron’s poem “Don Juan” contains a (seemingly endless) satiric dedication to Southey, replete with pithy lines such as “Southey; so quaint and mouthy.” His acerbic and biting poem “The Vision of Judgment” was so wholly punishing of Southey, his politics, and his poetics, that Southey’s literary stock never fully recovered. According to campus legend, the ebony and ivory desk that greets visitors at the main entrance to Wallace Library came from the Palazzo Mocenigo in San Marco, Venice, where Byron stayed when he lived in Venice. What a twist of fate, then, that this book of Southey’s ended up at Wheaton. Southey and Byron can continue their feud with a view of the elm trees around the Dimple.