21d Chilly— I kept house We had roast Turkey for dinner— Henry Hunt came in P.M. to work on spackling Kitchen. 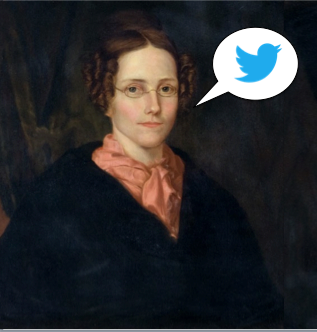 So reads the March 18, 1872 entry in the pocket diary of Eliza Baylies Wheaton, early patron of Wheaton College. Thanks to a new initiative of the Gebbie Archives, the above was also the first tweet from @elizabtweetin, a Twitter account created to publish Wheaton’s diary entries. Annotations and contextual notes on the diary entries will be posted on the Gebbie Archives newsfeed.

Archivist Zephorene Stickney says that tweeting Eliza B. Wheaton’s diaries provides the archives with a means to connect with students and alumni. The everyday character of the entries provides a timeless sort of familiarity, but Stickney says they serve an important historical purpose too. “We wouldn’t know a lot about the local Norton townsfolk of the time without these diaries.”

@elizabtweetin is just one more way that Wheaton is using digital technologies to foster the critical discussion and reflection so fundamental to a liberal arts education. “As a tool, Twitter can be used for so many different purposes,” says Pete Coco, the technology liaison who worked with Stickney and Assistant Archivist Megan Wheaton-Book on the project. “Whenever I hear people worry about what Twitter ‘means,’ I try to ask them: which Twitter do you mean?”

Coco says that Wheaton faculty have been particularly creative in using Twitter to augment class discussion, and  that their work was an inspiration for the project. Combining the twitter account with blogged annotations is a potential model for teaching students to deal with historical documents. “The fun and the challenge is more curatorial than technical.”

@elizabtweetin is launched along with @wallacelibrary, an official account for the college library and Wheaton LIS. “We’ll mostly use @Wallacelibrary to link to Library and LIS news, make important announcements, and invite a dialog with library patrons,” says Coco. That dialog is still a wildcard, and part of what makes Twitter what it is. “We don’t really know what students and faculty will do with it. But there’s the potential at least for things like contests or more playful interactions.”

Special thanks to Content Strategy Assistant, Siri Schoonderbeek, for her help with the @elizabtweetin project.