“We are shown the final dissolution of a person of worth”, wrote director Elia Kazan, “who once had great potential, and who, even as she goes down, has worth exceeding that of the ‘healthy’, coarse-grained figures who kill her.” Come experience the classic American story of Blanche DuBois and her final stop in the French Quarter of New Orleans with sister Stella and brutish brother-in-law Stanley Kowalski. “Poetic tragedy,” to use Kazan’s phrase, at its finest.

—from “The World I Live In: Tennessee Williams Interviews Himself” (April, l957).

Sixty years ago this coming December, A Streetcar Named Desire by Tennessee Williams premiered at the Barrymore Theatre in New York City. The legendary production, directed by Elia Kazan and featuring a cast that included Marlon Brando as Stanley, Kim Hunter as Stella, Jessica Tandy as Blanche, and Karl Malden as Mitch, was an instant sensation and made American theatre history. Kazan’s 1951 film version, which showcased many of the original Broadway performers and a new Blanche in actress Vivien Leigh, made cinematic history and implanted the play’s characters and setting in the collective consciousness of moviegoers across the country. Indeed, Streetcar today is so embedded in our culture that a recent PBS American Experience documentary on New Orleans went so far as to call the work “iconic”. For those unfamiliar with the term, Webster’s Dictionary defines an icon as “an object of uncritical devotion: idol.” How many scripts born of our native soil inhabit such a distinctive niche? How many are recalled in a flash and with such consistent animation and affection? The answer: not many, and therein lies the problem for anyone with temerity enough to revive Streetcar.

Alright, so the play and its illustrious track record casts an impressive shadow, but with all due respect to the ghosts of Streetcar past, our job as theatre artists is to create in the present. Genuflecting to achievements long gone only perpetuates a moldy museum resuscitation of material that is devoid of relevance and immediacy. Theatre with big vision and timeless substance—and Streetcar, in my opinion, is just that – refracts all kinds of unpredictable patterns and colors, and, if allowed, reinvents itself every time it appears. Great art absorbs and speaks to the climate of any age. We should not be attending theatre in order to revisit an old friend; instead, we should be curious about how that old friend has learned to breathe anew. After all, this a live art form, and it must live at its fullest potential in the now.

We have made every effort in allowing this incarnation of Streetcar to breathe freely. I have been blessed with an imaginative cast and design team who are not timid about making bold and sometimes unconventional choices. Hopefully, their innovative spirit will provide an original spin on what you see and hear tonight.

Some things about this mesmerizing creation, however, will remain the same. Like the French Quarter of New Orleans that is its home, this night in the theatre will forever teem with all kinds of life: the good, the bad, and the terribly ugly. Brutal and Tender. Crass and Lyrical. Rough and Holy. The clashing opposites throb and purr, and they’re embodied in every person on stage. The characters, by turns, are deeply flawed and breathtakingly humane: the worst and best of us all. Violence against women and the persecution of homosexuals, two threads among many in the Streetcar story, are injustices that beleaguer us still. And, the seismic nerve struck when Blanche labels Stanley “common” at the end of the first act places the spotlight squarely on social class and economic division: a separation which this world, this nation, and this college need to ponder with increased vigor.

It’s not an old play at all. Pertinent and powerful, eloquent and unsparing – now as then. Six decades have done nothing to diminish its status as one of the special ones. “Poetic tragedy”, to use Kazan’s description, at its finest. Enjoy the powder keg that is A Streetcar Named Desire. 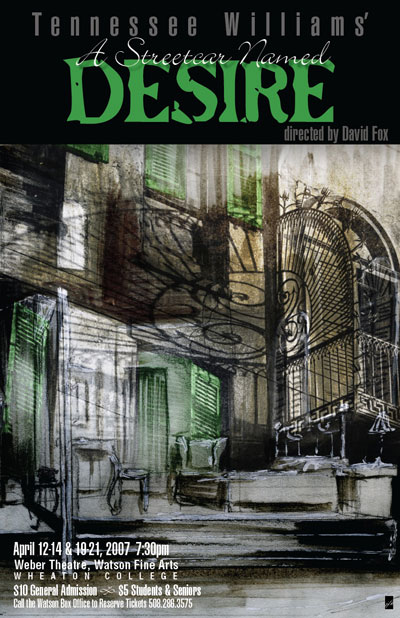