It is your kuleana to malama the aina. Mahalo.

We’ve been here studying and experiencing life in Honolulu now for almost three months. Even if in a modest way, the vocabulary of the Hawaiian language is soaking in to our consciousness and in doing so, giving us conceptual insights into how people think and live here. Roughly, kuleana is a word meaning responsibility; malama is caring for, aina is the land, and mahalo is a gesture of gratitude, of thanks. Any allegedly literal translation is of course problematic; such thumbnail attempts at translation indicate starting points for study. For example, kuleana is more than responsibility; like so many expressions the term directs us to something bigger; it voices the importance of reciprocity and relationship, so that, we have a kuleana to the land, protecting it, and the land has kuleana to us, providing us with sustenance.

One of the first – and then recurring – things we have heard in our seminar series with visiting scholars is the importance of establishing relationship. The statement at the top of this blog is predicated on relationship and reciprocity. Our guests have told us on several occasions that when we meet people on the street and strike up a conversation, it’s very likely that the first questions to us will be Where you from? How long are you here? Who are you? Who’s your family? When you leaving? Over time, this has been borne out by many conversations. By encountering and studying how words work, then taking to our feet and heading out into the city and the island of Oahu, we have begun to absorb values and a world view that people identify strongly with as having Hawaiian qualities.

Our semester academic program has been built on four discrete courses, two of which Prof. Searles and Prof. Allen taught in the first half of the semester – one basically on Hawaiian history, and the other on mele and hula, music and dance. We are now in the middle of our third and fourth class; one we are calling Visions of Society, addressing issues of contemporary social, political, and artistic concern, while the other is an independent study course. From the beginning, thanks to a Mellon Foundation grant we have been able to invite eminent scholars, artists, administrators and activists from NGOs to share their experiences. A lot of them are from the generation who grew up in Hawai’i in the 1960s and 70s – an important inflection moment when young people responded actively to a feeling that Hawaiian culture was in many ways at the point of being lost. Here are sketches of just two actions. After the Pearl Harbor attacks in 1941 the US military took control of the island of Kaho’olawe, turning it into a live firing range and test ground for a huge variety of weapons. Protests began and persisted after the war ended, but the bombing did not. The landscape of the island became pitted with craters and the water supply polluted (Kaho’olawe is to this day uninhabitable). An important moment in the recovery of the island took place in 1976 when a citizen group, “Protect Kaho’olawe ‘Ohana (family)” filed suit. It required the US Navy for the first time to submit detailed environmental impact reports and to inventory important archaeological/historical sites. The same year, groups of citizens started staging landings on the island to symbolically reclaim it for Hawai’i. This effort finally paid off in 1994 when the US government relinquished control of the island back to the state of Hawai’i.

Some actions are political; some are cultural; and most are both. A second example of what’s commonly known as the second Hawaiian Renaissance In 1973, an anthropologist, an artist, and a sailor formed the Polynesian Voyaging Society to research and attempt to prove that hundreds of years ago, as is told in “talk story” oral tradition, sailors from Polynesia had travelled guided by their knowledge of the stars and sea from Tahiti to Hawai’i. This proposition was laden with significance as it was intimately wrapped up in narratives of Hawaiian identity. While academics and international explorers like Thor Heyerdahl had acknowledged that in the distant past sailors from Tahiti could have by accident run into the Hawaiian archipelago, the notion that making such a trip could have been planned and intentional, was dismissed out of hand. First, the Society researched the forms of canoes used throughout the Pacific region in order to come up with a boat that combined historical features of sailing canoes from different countries, and then searched out master navigators who could help them re-learn the skills of sailing without modern navigational instruments. We visited the Bishop Museum, where we heard that the Voyaging Society trained for their Tahiti voyage using the museum’s Planetarium. In 1976 their flagship double hulled canoe ‘Hokule’a’ (“Star of Gladness”) sailed successfully from Hawai’i to Tahiti, with no modern navigational aids. This proved that the large body of historical lore testifying to an intentional migration from Tahiti to Hawai’i was based in fact, and the impact on Hawaiians was huge.

These are just two examples of subjects we have gone into in our seminar sessions. When we are not in class, we are deeply involved in integrative and experiential learning, sometimes together and sometimes individually, students following their own light and their own research interests, building towards their independent study final project to be completed in December.

Waikiki (wai, water, kiki spouting) is inescapable in the American imaginary as a trope for ‘paradise.’ What kind of paradise is it? It has many faces which we are exploring. This semester, some of us have fanned the flame of an interest in being out on the water on top of waves on a long board, while others incline more towards a simple swim or a beach front promenade. Some of us are engaged in research into the history and commercial development of Waikiki, and the working conditions of hotel workers. As I write, Local 5 has been on strike for 29 days, agitating for a living wage – the Honolulu mayor visited the picket line yesterday. Our students are studying the phenomenon of the Japanese fascination with Hawai’I, the history of medical care during the Hawaiian kingdom and the state of public health today. And one cannot escape the manifestations of cultural appropriation, or of social and economic inequality. Waikiki is a place where appropriation absolutely screams out to those familiar with the concept, while to the average tourist from Cincinnati such concerns seem a million miles away from their main business of being on vacation.

Interlude: Question to Self

A few weeks ago Prof. Allen was in a historical museum in Lahaina, the house of a missionary doctor built in the 1840s, talking to the woman who greets visitors and answers their questions. A man walked in, this was about 11:00am, and asked “What’s this place?” The host replied that it was a museum. “Is it haunted?” came the follow up question, and then as it was a few days before Hallowe’en, he ventured another query, “Are you open Hallowe’en night?” Having got the answer that no, there would be no Hallowe’en show, he turned and walked out. I asked if a lot of people come at her with this kind of questions. She replied that she is used to it. For him the concept of ‘historical museum’ clearly translated to some kind of Disney Fun House. Absolutely incurious, zero sense of or interest in American history in Hawai’i. How does an educator make progress in helping people become creative and critical thinkers?

I think it’s fair to say that our students have been deeply affected by the complexity and human drama of the Waikiki strip of skyscraper hotels – some of the time people have pretty much entirely wanted to stay away, while sometimes they have found activities to engage in. Signs on bus benches all through the Waikiki and downtown areas state the ordinance prohibiting people from sleeping or lying on the benches, an attempt by city government to keep the sight of many houseless people from impinging on tourist areas. On the more hopeful side, several of the large hotels have a cultural consultant on staff who are working hard to present Hawaiian arts to tourists and locals in a way that honors their history and complexity. We’ve sprouted an informal surfing interest group of students fascinated with the inner workings of surf culture here. One student is looking into the evolution of surfing’s history from a sport reserved for ali’i, noble families, to the subculture of beach boys offering lessons and reselling boards. How can these entrepreneur throwbacks apparently to the 60s or earlier make a living today? Are precepts of Zen Buddhism to be found in the day to day subcultural lives of surf people at Waikiki? This is just one of 14 such projects gestating at the moment as our students dive into their independent study projects

Siamese, St. Bernards, Samoyeds: Ode to our Pets Back Home

The author Mark Twain spent four months on assignment in Hawai’i in 1866, commissioned by the Sacramento Bee newspaper (largest in the West) to give his observations and impressions of the Hawaiian kingdom. He came to Hawai’i about a century after Captain Cook, and decades before mainland American interests usurped the Hawaiian monarchy. His descriptions are amazing glimpses into pre-occupation Hawai’i. Twain observed about Honolulu:

– Roughing it in The Sandwich Islands (Mutual Publishing, 1990).

Our Wheaton group’s encounters with the East West Center’s resident cats is central to understanding our semester here and will receive their own blog post shortly. 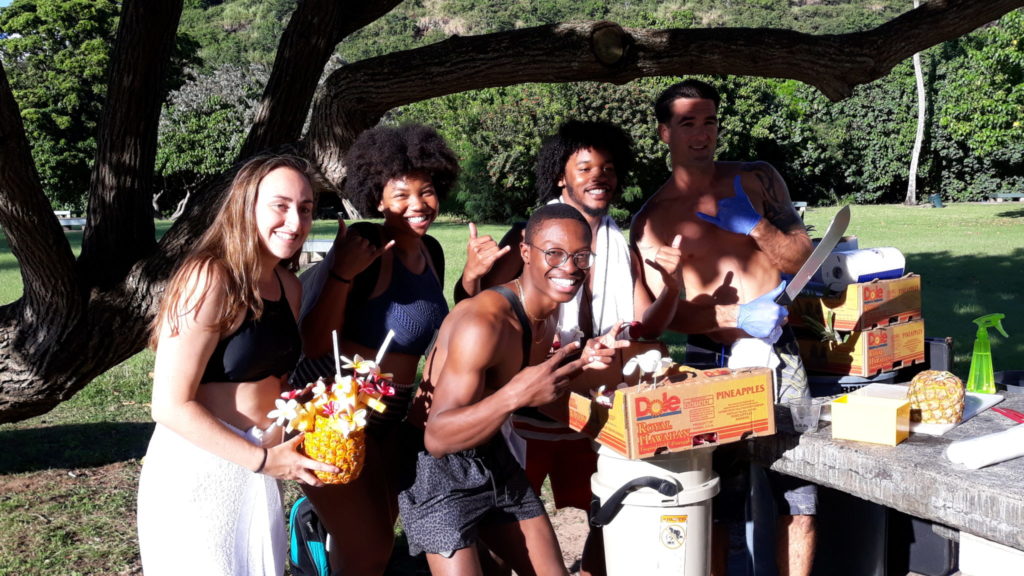 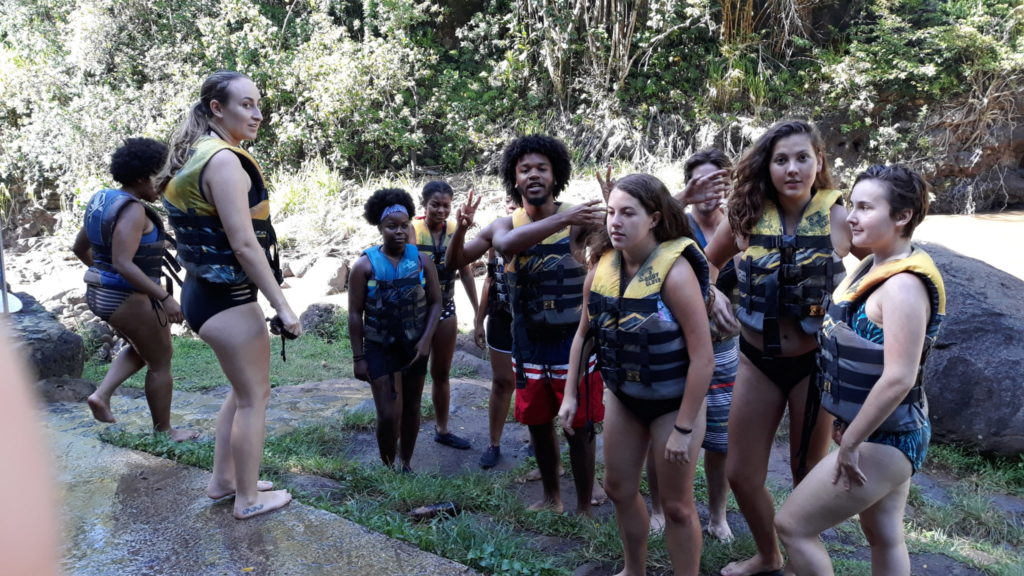 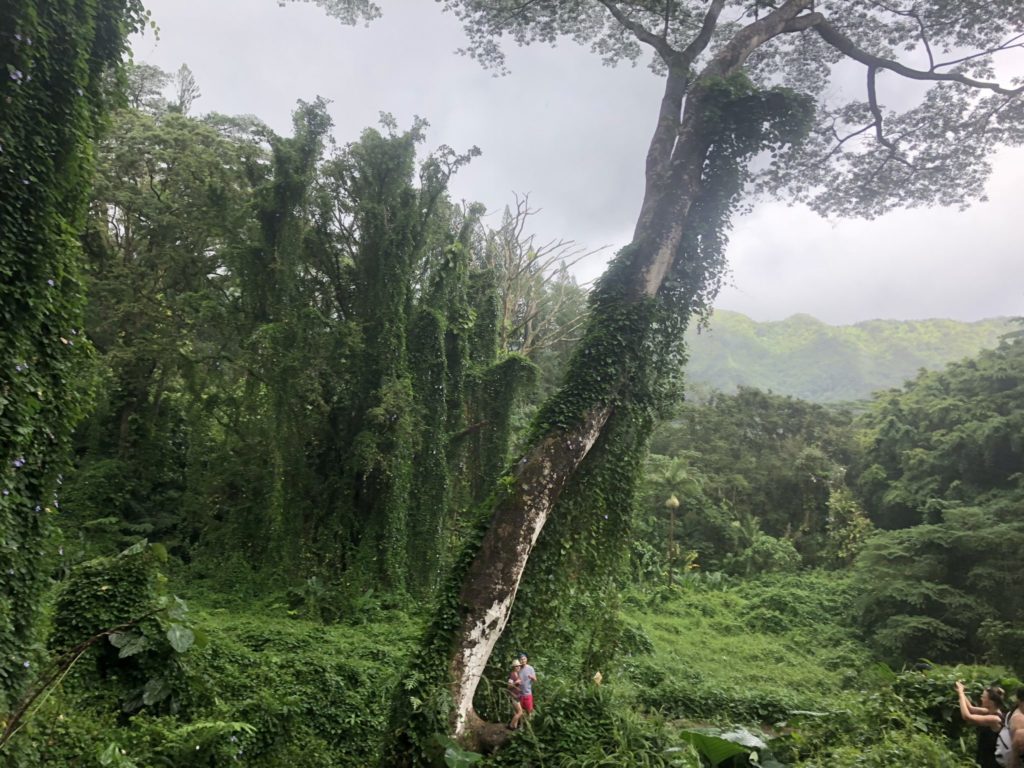