“No Lying Down in Bus Shelter or Bus Stop Area”

One thing never far away spatially from the idyllic environment of sun and sand in Honolulu, a terribly brutal and unjust counterpoint, is the presence of people living and sleeping in the streets, on park benches or right on the pavement. People keep their belongings in commandeered and modified grocery carts. Single men, single women, families. Many are Hawaiian and a growing number are from the Federated States of Micronesia and the Marshall Islands whose citizens are legally allowed to immigrate to the USA via an arrangement in compensation for United States’ use of Micronesian islands such as Bikini Atoll for nuclear testing. The situation with the homeless in Honolulu, and with prejudice in Hawai’i against Micronesian Islanders, is a topic which several of our students are looking into for their independent study projects. 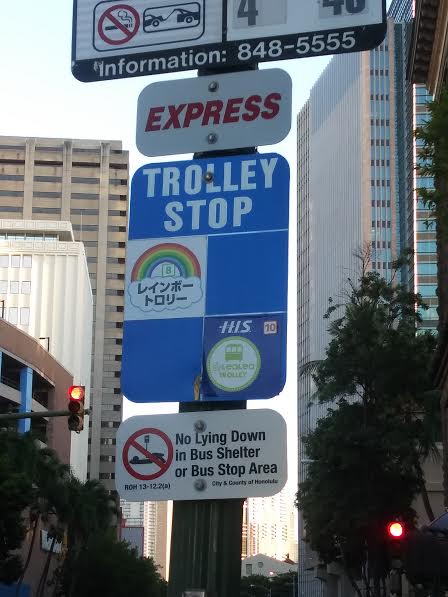 When we arrived here we noticed pretty much immediately that in certain neighborhoods often around city parks, dozens and dozens of people have set up tents or other improvised shelters in rows along the sidewalks. People suffer through the long heat of day, with hardly any shelter from the sun; they suffer the lack of basic hygiene. They suffer the stares of passers-by, and they suffer a city government policy, apparently, which has criminalized the practice of sleeping out on park benches, bus stop benches, or in particular neighborhoods. While riding the city busses we have seen how on one day there will be a settlement of dozens of people camping along a particular road, and the next day, all that remains is red plastic fencing, the people having been ‘moved on’ and locked out. The main visible action that the local government appears to be taking regarding the situation with the homeless is forbidding them to lie down and go to sleep in upper class or tourist neighborhoods (see photo “No Lying Down in Bus Shelter…”).

Some people we see on the street are houseless and some homeless – a distinction made between people who may have a job but can’t afford rent for an apartment so are sleeping in their car, as opposed to people who have not even a sheet to cover themselves when they lie down after dark in a doorway or on a busy sidewalk. At dusk I have seen groups of men sitting on a concrete curb smoking cigarettes, waiting, their simple bedrolls ready to unroll when darkness falls.

A few nights ago, coming home from sitting in with a band at the Imua Lounge a bit before midnight, I came across a woman, old or young I could not tell, sound asleep in a Walgreen’s grocery cart in the middle of the sidewalk. Approaching her from behind it looked like she was holding on to something. When I passed her I saw her arms were wrapped around a stuffed teddy bear. Someone’s daughter, someone’s aunty. 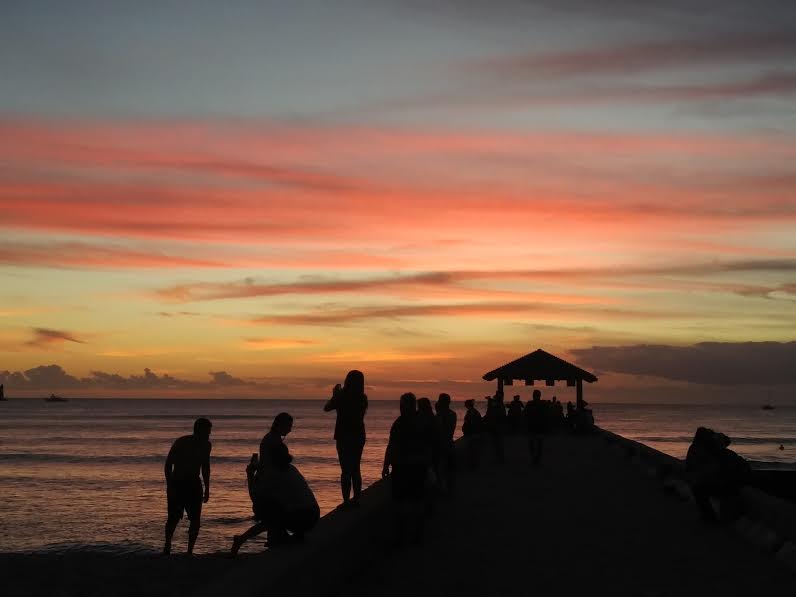