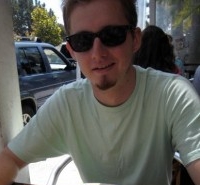 John Campopiano, Independent Ethnomusicology Major, ’08. Graduate Student in Library Science and Archival Studies, Practitioner of Fretless Banjo and Musical Saw. After graduating from Wheaton I had the good fortune of being adopted into the musical family of New England Conservatory (NEC). Initially, I found myself working as a departmental assistant to pianist Ran Blake. As my responsibilities grew, I began doing graphic design for the department as well as handling much of Ran’s archive collection consisting of 50+ years of concert posters, books, reviews, articles, records, reel-to-reel recordings, photographs, and film. It was also around that time that I began seeing skills and interests I had developed at Wheaton coalesce with my budding interests in researching, preserving and making available any materials of value to the arts community (moving images, photographs, oral history recordings, music recordings, literary correspondence, etc). Last year I decided to take my interests a step further and pursue an MLIS degree with a specialization in archival education and the arts at Simmons College. In general, archival science is a rich and rapidly changing field and archive students are exploring many avenues (one recent Simmons College graduate is an archivist at the National Cowboy & Western Heritage Museum in Oklahoma, while another graduate has been hired as an information and content archivist at Google).

With respect to my own musical endeavors, I’m still undertaking the task of learning the fretless banjo techniques found in 19th century American minstrel banjo music. In 2008 I discovered that my great-grandfather was a clog dancer in early 20th century minstrel shows which ignited an interest in me to explore this controversial and highly American musical repertoire. Since, I’ve been playing and connecting with early banjo enthusiasts from around the country. In 2009 and 2010 I received the William E. Gribbon Award through the American Musical Instrument Society that funded two trips to their annual meetings. During these meetings I was able to network with banjo makers and instrument enthusiasts. It’s my plan to continue my work in early banjo music while in graduate school. I believe it is a testament to the rich, open-minded education I received as an independent ethnomusicology major at Wheaton that I’ve been able to successfully nurture and mold my interests in a variety of exciting (and interconnected) fields.