Class Stopover at the Pali Overlook

Site of the Defeat of the Oahu Army by Kamehameha I

Editor’s note: Professors Julie Searles and Matthew Allen are currently leading a class of 14 Wheaton College students in studies of Hawaiian history and culture. We are in residence at the East West Center at the University of Hawai’i for the fall semester 2018.

Getting the Program Up and Running

For the instructors Julie and Matthew, this Hawai’i semester is unique for us in our career as teachers because so much of the program is necessarily being built in the same moment that it is being acted out. While we had expert guidance from local colleagues at the University of Hawai’i since the inception of the program idea, we didn’t (and couldn’t) arrive in Hawai’i with our syllabi all planned out. We had to be here on the ground in order to begin to develop relationships with the artists and scholars who are generously providing us with their expertise and perspectives on Hawaiʻi, and then in turn begin to design our syllabi. Several key terms have emerged which we have found to be profound teaching tools, and which we’ll feature in these blogs. One of them is ahupua’a.

Ahupua’a: is a term that refers to the geographical administrative divisions of Hawaiian society which were in place at the time the British Capt. James Cook landed on the islands in 1778-79. An ahupua’a can be visualized as a slice of a pie – each of the Hawaiian islands was divided into wedge shaped units by local chiefs, stretching from the mountain tops of each island down to the sea shore, along the way fanning out and incorporating all the different climatic environments and resources from seaside fish and taro ponds to mountain forests. Over the course of the nineteenth century the ahupua’a as a working system of social organization gradually fell apart as American and European commercial interests agitated for the practice of private land ownership as part of a move to develop huge ranches, coffee, sugar and pineapple plantations. A fundamental and profound reconceptualization of the basic idea of stewardship of land is a central part of the drama which culminated in the overthrow of the Hawaiian monarchy in 1893, annexation in 1898, and finally in 1959, statehood. 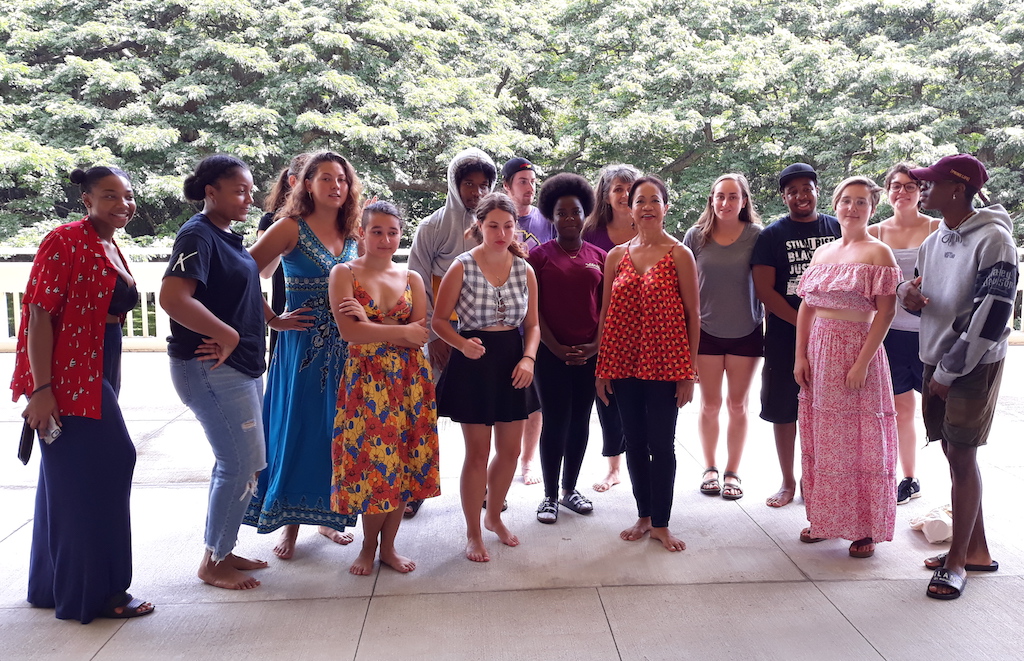 With our hula instructor Char at the East West Center, Honolulu