Touba Ghadessi’s recently published (April 2018) monograph Portraits of Human Monsters in the Renaissance – Dwarves, Hirsutes, and Castrati as Idealized Anatomical Anomalies examines how bodies that fell outside of the norm became, in fact, fundamental sites of knowledge for early modern societies. Together, the extraordinary bodies at the core of this project oscillate between abundance and absence, between object and subject, between splendor and horror. All of these monstrous bodies speak not to their exceptionality, but to their centrality in a history of difference, which grounds the inquiries of this book.

In April 2018, Ghadessi also became the Chair of the Board of Directors of the Rhode Island Council for the Humanities. In that capacity, she works to highlight the importance of the humanities not only at the state level, but also at the federal level by advocating in Washington D.C. for the National Endowment for the Humanities. 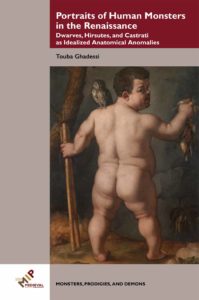