Dr. Sameena Mulla is an Assistant Professor of Anthropology at Marquette University (WI). She will be discussing her most recent book entitled “The Violence of Care: Rape Victims, Forensic Nurses and Sexual Assault Intervention.” Drawing on four years of participatory research in a Baltimore emergency room, Sameena Mulla reveals the realities of sexual assault response in the forensic age. She analyzes the ways in which nurses work to collect and preserve evidence while addressing the needs of sexual assault victims as patients. Mulla argues that blending the work of care and forensic investigation into a single intervention shapes how victims of violence understand their own suffering, recovery, and access to justice—in short, what it means to be a “victim.” 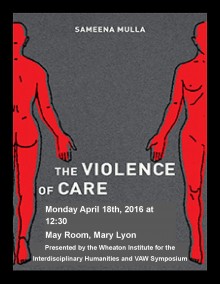