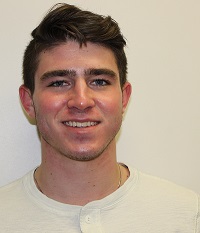 Nowadays, if you were to go up to people walking down almost any street in in the United States and ask them, “How much confidence do you have that the individuals holding office in any of our three branches of government will do the “right thing” the majority of  the time?”, an overwhelming number of them would respond with “hardly any”. Cynicism and distrust for government has become a trend in the United States, specifically from the early 1970’s. Throughout the past four or so decades, a tremendous number of American citizens have followed along with this development of skepticism of the government, regardless of gender, political ideology, region of the country, or even the income and education levels of the individual. All of this begs the question, “Why are we seeing such  high levels of distrust for the American government?” 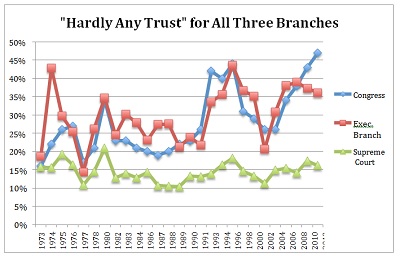 The trend of cynicism that has continued to grow throughout American society is  one that needs special attention. These numbers reflect the opinions that many Americans have of the officials that are supposed to represent the people of this country. With numbers this low, it can undermine the ability of these officials to make important policy decisions, start initiatives and help make this country a better place to live. One can only assume that these numbers of distrust are going to continue to increase as the years go on. As the  number of political scandals continues to increase (i.e. Watergate), it gives the public even more of a concrete justification to be skeptical of the officials elected to office. It seems that although incumbents are replaced with new politicians, the majority of them fail to meet the expectations of the citizens who elected them.

In order to see actual change in these percentages, it may take a complete revamp of the way these institutions are structured. All politicians, from Representatives to Senators and up to the President, should be held accountable for each and every single one of their actions while in office. The American people need to be assured that the people they elect to office will fulfill the promises that they make throughout their campaigns. That when any politician takes an oath into office, he or she will maintain the integrity of the office they are being elected to. That they will be working on behalf of the people, not for their own self interests. Any violation of such principles will be accounted for and it will solely be up to the people to decide what should be done as a consequence. The United States has continued to have relatively low levels of trust in comparison to other developed nations – if we want to see higher levels of trust, maybe it is time that we take some notes.