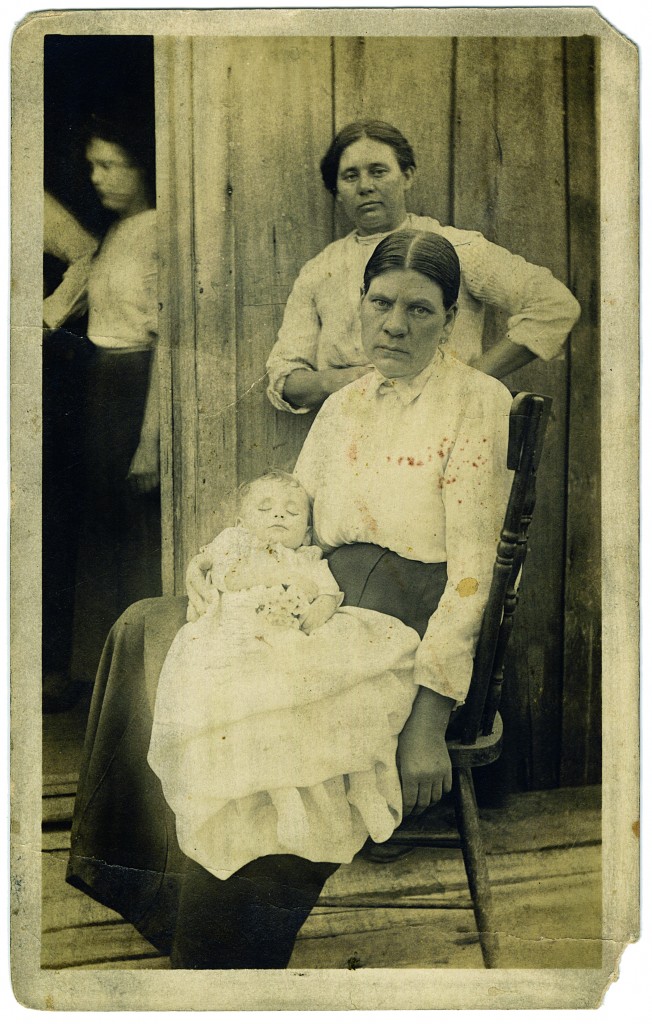 Pictures of a dead child or other family member were common in the late nineteenth and very early twentieth centuries. It was a way of remembering someone who had never been photographed when they were alive. The pictures seem strangely morbid to us today due in part to the obvious efforts made to make the corpse look alive – eyes propped open, sitting, or even standing. Usually, the live people in the photograph dress formally and are emotionally composed.

This photograph of a grieving working class mother and her dead child is quite different. We feel her desolation. We see her exhaustion in the slump of her shoulders, her body, and the left arm and hand dangling helplessly at her side. She has a blank stare, but her eyes are alive with sorrow. Her jaw is clenched. The woman standing directly behind the mother looks at her steadily with a gaze that is both tender and sad. This photograph is not a formal moment fixed in amber, but rather an instance of misery. The woman to the left has just turned toward the scene. The blurred motion is distinct enough to create a double exposure that makes the scene come alive and takes us back to a day in 1909 when, next to a plank house on a rough wooden porch, and somewhere in America, a mother grieved as her baby was being prepared for burial.

When life expectancy improved from forty years to eighty over the course of the twentieth century, it didn’t mean that everyone on average just added another forty years to their lives. There were then, as now, many people who lived well beyond the average life expectancy. Many of us know people in their late eighties and nineties and many did back then. What improved life expectancy really meant was an enormous reduction in child mortality. It was babies and kids getting beyond the hurdles of childhood diseases and infections – and not dying — that made it possible for many more people to live at all, and in time for a growing number to live quite long lives in good health. In 1900, the infant mortality rate (the number of deaths per one thousand live births for children one and under) was 162 per thousand. As of 2011, it is down to 6 per thousand. In other words, the odds were one out of 6 that a child born in 1900 would not live into a second year. Today, the odds are only one out of 167.

When we factor in the fertility rate (the total number of children on average that women bear during their lifetimes), we summon up an even bleaker tableau. The fertility rate in 1900 was 6 children per woman. Multiply that by the infant mortality rate (162/1000 times 6) and you have 972/1000 or nearly a statistical certainty that in 1900 a women would lose a child under one year of age at some point during her child bearing years. Today women have a fertility rate of 2. Doing the numbers – 6/1000 times 2 – yields 12/1000, which means that the odds of a woman losing a child in 2013 is roughly one out of eighty.

Today, young women — like young men — are exhorted to be all that they can be and strive to realize their dreams. What could possibly be wrong with wanting to “have it all”: material rewards, a challenging career, supportive relationships and a loving family with children. But, at the turn of the century mothers and grandmothers would never tell their daughters such a thing and instead reminded them that it was women’s lot to suffer. They weren’t being cruel. It was just that knew that it was certain that someday their daughters would be sitting in a chair like the woman in the photograph, holding a dead child, and drowning in sorrow.

It still happens and when it does the grief is just as deep as it was for this woman whose name we do not know. But the dramatic decline in infant mortality not only ensures that human life is abundant, but also that much of the burden of sorrow for men, and especially women, has been lifted.