Home » Academics » Sociology » Pained to be an American? A Malady that Only Social and Political Reform Can Remedy

Pained to be an American:

A Malady that Only Social and Political Reform Can Remedy 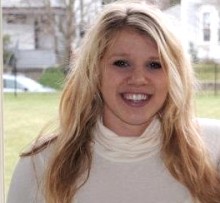 American nationalism is past its heyday, and the phrase “proud to be an American” is becoming increasingly irrelevant, an archaic notion left over from the Kennedy era, and hardly describes popular opinion in contemporary America. Since the 1970s, attitudes on what it means to be American in both domestic and global spheres have been becoming increasingly self-critical.

In terms of how we position ourselves in a global context, over time we are becoming significantly more cynical about our society and culture — our national identity — in relation to the rest of the world. According to the General Social Survey, Americans were 33% less likely to agree that America is better than most countries in 2014 as they were in 1996; and Americans were twice as likely in 1996 than they were in 2014 to say that if other countries were more like America, the world would be a better place.

But does this diminishing faith in the government’s capabilities translate into the voting booth? Looking at voting statistics, it becomes evident that since the 1970s, political participation in presidential elections has decreased substantially compared to previous years. The average voter turnout of the eleven elections between 1928 and 1968 was 60%, while in the following eleven election years, from 1972 to 2012, the average voter turnout was only 54%[1]. If this question of competency isn’t enough to convince you of America’s increasingly negative perception of its government, the following graph from the American National Election Studies (ANES) illustrates increasing doubts about the government’s integrity as well. 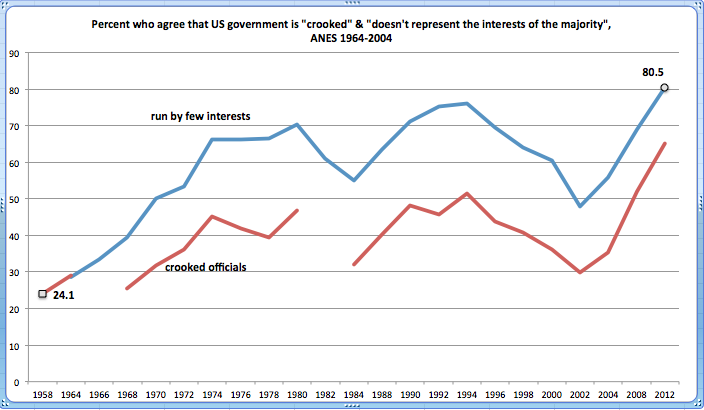 What we’ve been experiencing in recent decades is a comedown from the Post-WII high, or a correctional phase in which we Americans are trying to rectify our egos and redefine our place in the world. Since the late 1960s, this corrective mindset has been motivated by any number of things. To name a few: the Vietnam war and its unprecedented press coverage (the first “television war”); Watergate and Nixon’s impeachment; the invention of the internet, a proliferation of personalized (unfiltered) media, and ever-increasing globalization.

So, what happens when a country founded on a narrative of free speech and representation becomes increasing cynical about the state of American society? Most likely, we are seeing the implications of this attitudinal shift right now, in this year’s campaigns. Citizens are eagerly, passionately, and very deliberately ready to rally behind a political outsider, whether Trump or Sanders. My inclination is to say that these developments are harbingers of social and political unrest in America’s near future, and quite possibly will lead to radical reform of one kind or another. For now, I will let the phrase make America great again plastered across billboards and countless front lawns speak for itself.