Local Bernie Sanders supporters may find solace in Green Party presidential candidate Jill Stein, who likened herself to the Vermont senator at an event at Wheaton College Sunday afternoon.

Stein said a third-party candidate is the only way the people’s voice will reach the White House – referencing the leaked Democratic National Convention e-mails, which many say plotted against outsider Bernie Sanders in the Democratic primaries.

“You cannot have a revolutionary campaign inside a counter-revolutionary party,” she said. “But our campaign is now Bernie Sanders on steroids. We’re doing all the good things that Bernie did, plus a few more. It’s hard to do that when you have to play the Democratic party game.”

With two months left in the election, Stein distanced herself from Democrat Hillary Clinton and Republican Donald Trump, saying both candidates’ actions show they are not working for the American people.

Stein said the traditional two-party political system stands to silence the “truth-tellers,” like herself and Sanders, and urged residents against “voting for the lesser of two evils,” – a phase she hears a lot in this election.

“We have to stand up, because the corporate political parties are not going to do it for us,” she said. “When you vote for the lesser evil, you are allowing yourselves to be silenced. And if we are silenced, we create a moral vacuum.

“We are the ones we’ve been waiting for. We can create an America and a world that works for all of us.”

Over 250 students and residents in green Stein t-shirts packed a Wheaton auditorium to hear the presidential hopeful discuss her platform Sunday.

Four rows of additional seating were set up to relieve people standing in stairways and entrances, and a few people were turned away from the event due to space, organizers said.

Stein has been touring colleges around the country in recent weeks calling for loan forgiveness and free public higher education.

While a student bailout would require a big stimulus package, Stein said it would cost less than the 2008 bailout of Wall Street, which totaled $16 trillion. To bail out a generation of student loan debt would cost $1.3 trillion she said.

“If we did it for the crooks on Wall Street, it’s about time we do it for the young people who are the victims of that waste, fraud and abuse,” she said.

Stein is also advocating for a “Green New Deal” that would create 20 million new jobs while working toward sustainable sources of green energy. Stein said by ending our dependence on oil, we can also make many wars obsolete. She called for an arms embargo on the Middle East and a reduction of our military budget, funneling the money instead to green energy.

“We put blood, sweat and tears into this (war) and a huge amount of money,” she said. “But every terrorist enterprise that we’ve been fighting has only gotten stronger and bigger. You don’t want to keep doing what has been proven to be a catastrophic failure. How about instead of fighting over fossil fuels, we all use those resources to green our economies.”

Stein also campaigned for access to the first presidential debate on Sept. 26. The Commission on Presidential Debates announced Friday that Stein and Libertarian Gary Johnson did not poll the needed 15 percent to qualify for the debate, but Stein called the Commission a “fraud” that supported the “two-party tyranny” of the United States.

“That’s not what democracy looks like,” she said. “We need to have more voices and more choices.”

She invited the audience to protest the decision outside of Hofstra University next week.

After a 30-minute speech, Stein welcomed questions from the audience, who asked about immigration, the military, GMOs and more.

After fielding a question asking for more specifics on her policy goals, Stein said her focus is on getting more involvement from the everyday American in policy decisions.

“My overarching policy is to get the big money out and to get the people back in so we can start making this mid-course corrections,” she said. “It’s not like we have to prescribe everything that needs to happen. I really believe in the ingenuity and the creativity of the American people.”

But some students said while her stances sounded great in theory, they left with questions on how she would make them come to life if elected.

Senior Amanda Banegas said she is frustrated with Clinton and Trump, and was considering not voting, but now wants to take a closer look at Stein, who she thinks could be more of the people’s advocate, before November.

“I hope she gets the opportunity to go toe-to-toe with the other candidates in these debates,” Banegas said. “Because I think that’s the only way we’ll have some of these questions answered.”

Stein is a familiar candidate to Massachusetts. The Lexington resident ran for governor in 2002 and 2010 and secretary of state in 2006. Most recently, she was the Green Party’s presidential candidate in 2012.

KAYLA CANNE can be reached at 508-236-0336, at kcanne@thesunchronicle.com and on Twitter @SCNAttleboro. 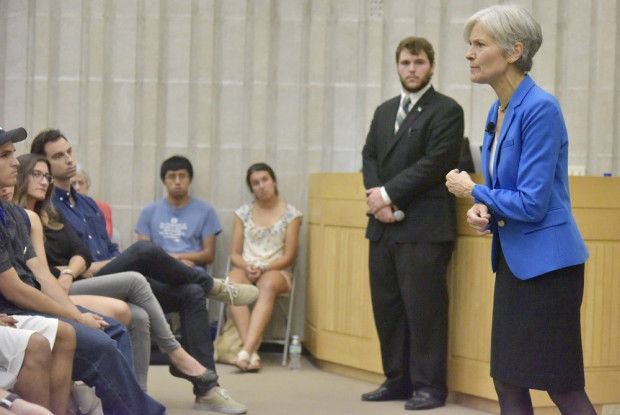