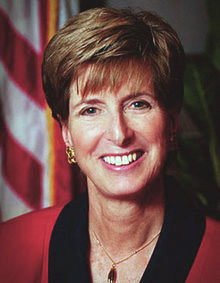 On Wednesday, April 27 Christie Todd Whitman (’68) will be a guest speaker in several political science courses at Wheaton.

Whitman served as governor of New Jersey between 1994 and 2001, when she became Administrator of the Environmental Protection Agency under President George W. Bush. She is the author of It’s My Party, Too (2004), a memoir chronicling her lifetime of participation in Republican politics as an ideological moderate. Whitman will assess the state of American politics and the functioning of the American political system in an increasingly polarized partisan era.

All Political Science and International Relations majors are welcome to attend Dr. Bishop’s classes on April 27, 2016 where Christie Todd Whitman will give specific presentations for political science and international relations students.