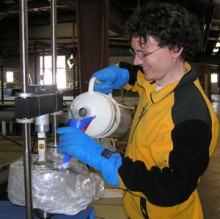 A NASA grant to Prof. Geoffrey Collins to study erosion on Saturn’s moon Titan turned into a research project about the hardness of water ice at very low temperatures. Collins and his collaborators at San Francisco State University recently published the results of their study in the Journal of Geophysical Research. The experiments tested the strength of ice in tension, and the energy required to propagate cracks through ice. Similar experiments had previously been done down to temperatures of -50 C, but the new experiments used cooling with liquid nitrogen to explore the behavior down to -170 C, which is more relevant to the surfaces of moons in the outer solar system. As the ice became colder, it also became harder to break, so it is expected that ice in the outer solar system should be harder than ice in glaciers on Earth.