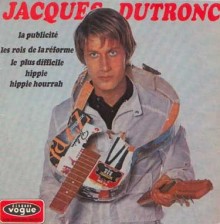 Professor Kirk Anderson recently traveled to the University of Notre Dame to give a multimedia presentation entitled “1966: From Imitation to Appropriation in French Pop Music.”  Anderson shared his findings based on statistics he has compiled from the French record charts during the 1960’s suggesting that 1966 was that decade’s high point for French songwriters. The talk focused on the music of Antoine, Ronnie Bird, Jacques Dutronc, Nino Ferrer, and Serge Gainsbourg.