Norton middle schoolers recently had the chance to expand their French skills, and learn about college life, during a lesson with Professor of French Studies Jonathan Walsh’s “Read and Converse II” class.

The collaboration began last year, when Norton Public Schools world language teacher Kimberly Bray reached out to the French Studies Department to see about planning a day for Wheaton college students to interact in French with fifth graders at Norton’s Henri A. Yelle Elementary School.

This year, the Wheaton students worked with seventh graders at Norton Middle School, getting together on Wednesday, April 24, to play the game “Le jeu de 7 familles”—similar to Go Fish, but with a family theme.

“The goal is to collect all members of a family by asking questions, in French, for instance:  ‘Ann, est-ce que tu as la grand-mère de la famille Laurent?’,” Walsh said. “The game is a great way to teach vocabulary and simple sentences.”

With some basic French under their belts, the seventh graders were able to have simple conversations in French with Wheaton students. They also interacted in English, asking questions about what it was like to live and study on a college campus. 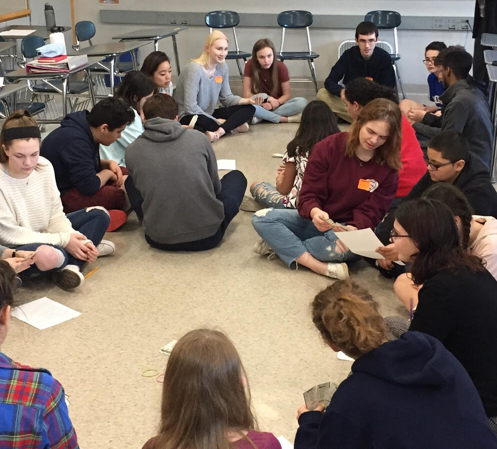