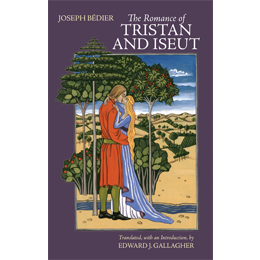 In much the same way that Viollet-le Duc, the celebrated restorative nineteenth-century architect, sought to repair the devastation worked by the ravages of time and saved for the world the royal necropolis at Saint Denis and those Gothic jewels in the very heart of Paris: the Sainte Chapelle and the Cathedral of Notre Dame, Joseph Bédier, “that distinguished medievalist, who,” according to Dorothy Sayers, another scholar-novelist, “by rare good fortune combines profound scholarship with fine poetic insight,” succeeded in his efforts “to revive for readers of our day the legend of Tristan.”

Joseph Bédier’s award-winning novel, The Romance of Tristan and Iseut, to which Sayers refers, has just been published in a new English translation by Ed Gallagher, the first in English since the Anglo-French poet Hilaire Belloc published his incomplete 1903 version of Bédier’s Romance, a version not completed until 1945 when Paul Rosenfeld finally restored four chapters suppressed by Belloc.

Bédier used the extant twelfth-century fragments of the celebrated legend by Béroul and Thomas and the works of their foreign imitators to reconstruct a complete version of this most captivating tale of love, betrayal, treachery, and death. In addition to his translation of the Romance, Gallagher’s book includes an introductory essay analyzing Bédier’s work on the legend, a map, a glossary of proper names and another of technical terms. The book also features appendices with two essays on the legend written by Bédier in 1904 and 1934, the first review of Bédier’s novel from 1901, and a scene found among Bédier’s papers that he had composed for his novel but that he never included in it. This is Gallagher’s second book from Hackett Publishing Company. The Lays of Marie de France, Translated with Introduction and Commentary appeared in 2010.