Carrie Slayton, a French Studies alumna, sends exciting news. She earned her Master of Arts this spring at the University of Connecticut, having successfully defended her thesis, “Vidocq, Vautrin, et la naissance du genre policier.”  She also won two awards: the Anne Berthelot Graduate Award, and the Graduate Award in Literary Translation. She’s currently translating a French novel into English, and plans to publish it. 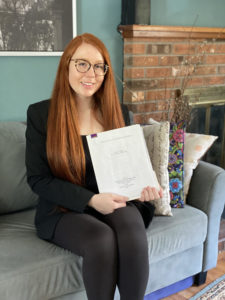 Carrie’s thesis examines the way in which Vidocq’s Memoirs helped mythify his life, the way Honoré de Balzac reincarnated the paradigm of this criminal-become-chief of police in the character of Vautrin, and how this combination would become the prototype of the modern detective in a genre that encompasses crime and mystery literature. It looks as though Carrie has found a rich vein of research that will likely lead her to other literary “mysteries,” as it were. Those curious can find her thesis here.