Home » Academics » Academic Festival » The Importance of Care in Healthcare

Thank you Professor Kerner for nominating me to participate in this festival. My name is Christine, she/her/hers pronouns, and my senior year thesis incorporated what I have learned so far as a senior in my liberal arts degree in public health and anthropology with a minor in philosophy.

This thesis joined discourse about anthropology’s models of cultural competency and how its application feels from the perspective of immigrants.

My research question was: How do immigrants experience the U.S. healthcare system?

I interviewed 5 immigrants from Mexico, France (2), Columbia, and Guyana on how they have experienced the U.S. healthcare system.

I found that they practiced agency in employing medical pluralism because capitalist models of efficiency have lead them to feel uncared for. More specifically:

I concluded that immigrants do not acculturate their health practices. Immigrants practiced medical pluralism in order to exercise agency and feel truly healthy because they did not feel truly cared for by capitalist models of efficiency, mainly.

My biggest takeaway: There seems to be a lack of humanistic touch in medicine that is actually very important for people to experience so that they may share concerns and therefore receive more care. Continuing, there is a disconnect between doctors and especially their immigrant patients that needs to be bridged because it can be a matter of life or death. 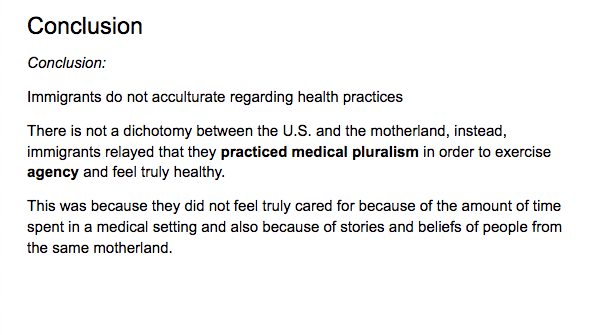