As a philosophy major, I know that my field is home to among the most inaccessible literature and concepts in academia. Even as someone who loves reading and philosophy, and has been studying it for two years, I still struggle immensely to get through some of my readings.

But, as a philosophy major, I also take incredible joy in this toil, because I find critical, rational thinking to be among the most important tools that anyone can have to navigate the craziness that is the world we live in. However, as I have come to find out recently, much like reading it, teaching and discussing philosophy is hard. I have always struggled to get my non-philosophy major friends and family to engage in conversation with me about my class content, just because I didn’t know where to start!

But last semester, I managed to beg my roommate to take a philosophy elective with me. And it was unlike any other I’d been in so far. Life, Death, and Meaning with Professor John Partridge introduced me to a type of philosophy that tried to do the impossible: take the most subjective matter on earth, the meaning of life, and make it rational. And it did prove to be almost impossible.

But between all the classroom debates and different ideas, something amazing started happening that semester: my roommate and I were talking about philosophy for the first time! And even though it started with just us, those conversations bled into full on discussions with our housemates, friends, and families.

So when Professor Partridge assigned us our final project, “the awesome thing,” in which we were allowed to make any kind of creative project about the content we had learned, I knew what I wanted to do. I wanted to teach my friends and family about everything I had learned. So I decided to make a podcast. 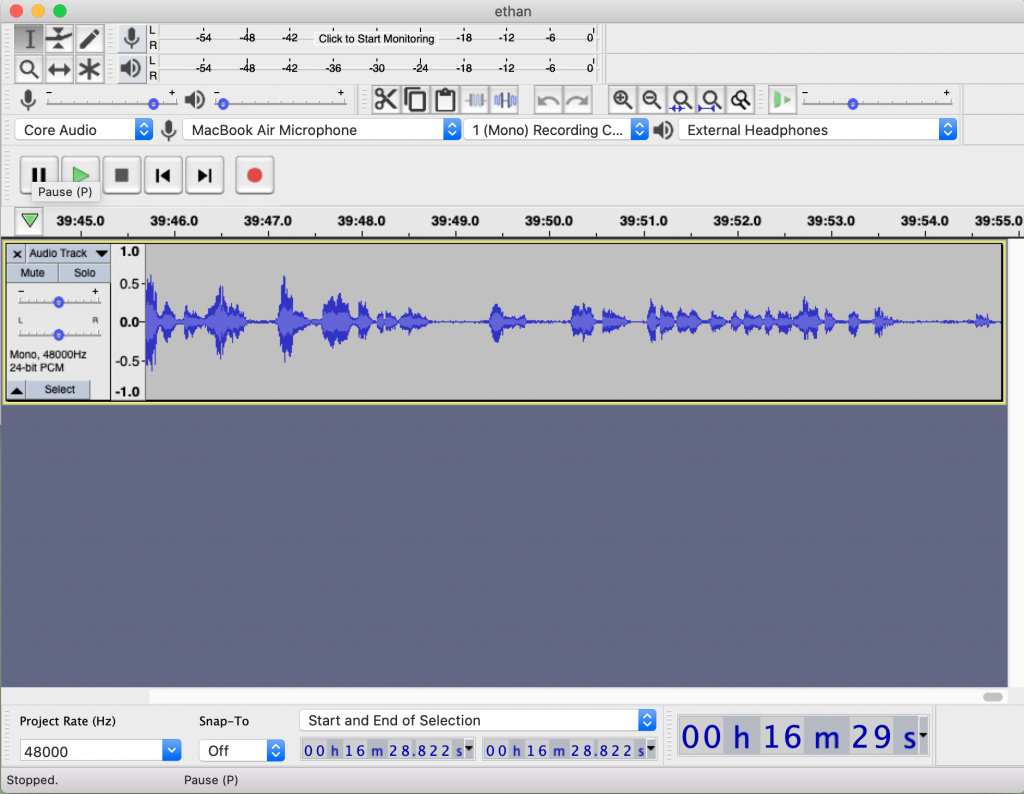 The process proved to be significantly more difficult than I had envisioned. As an avid podcast listener, I assumed that magical conversations, clarity, and understanding would flow freely as soon as I turned on a microphone. That was not the case. After a disastrous conversation with my mother about her christianity and what happens after we die, my dreams of casual, free flowing philosophical conversation got a reality check.

I realized that grasping concepts in class was one thing, but trying to teach them to other people was completely different, and much harder. So I scoured the internet for any kind of teaching philosophy I could find. I listened to other podcasts, reread the articles from class, took note of teaching strategies I found, and most of all, I outlined. It turns out that to make a good podcast, you have to have a plan.

I spent most of my time working out the conversation arc, finding quotes and examples, and trying to figure out what I would say or do if we went off track. They say in journalism that if you want to be effectively describing a subject, you should only write (or in my case, teach) 10% of what you know. And it turned out that just barely understanding the material is nowhere near enough for that threshold.

But, after days of preparation, and learning how to edit audio, and outlining, and re-outlining, I was ready to try again. And the conversations were better. By my third and final episode of the project, I had a body of work that I was really proud of. I felt accomplished, like I had been able to share what I had learned with people I love, and I submitted the project.

But I wasn’t quite finished. This felt like a good start, but I wanted to do more. So when this semester came around, I signed up for a new class at Wheaton, Professor Patrick Johnson’s Podcast Production and Storytelling, and I decided to continue the work I had started into the new semester. In the class I have been able to learn how to work with audio much more effectively, how to make my own introduction music, and make the podcast sound really professional.

The most important thing I’ve learned though, is how to use those new skills in sound editing to aid my teaching. I can make my own segments using sound cues, use music to break up the conversation, and after six episodes, I finally feel like I know how to make a good outline. I was able to condense the conversations from 40+ minutes to around 15, and I learned the difference between lecturing someone and teaching them.

I hope to upload my new episodes to streaming services soon, but until then you can check out my older episodes on  Spotify.

Overall, I have found this project to be incredibly rewarding. Not only have I learned so much about different philosophical concepts, but I’ve also been able to engage with my discipline in a way that I never have before. Through this project, I’ve become a better storyteller, a better philosopher, and most importantly, I think I’ve been able to bring a little bit of philosophy into the lives of my friends. And if I can do my part to make the subject I love more accessible, I consider myself lucky.