Each semester, the Department of Theatre and Dance comes together to produce a mainstage theatrical production in the Dorothy Littlefield Weber Theatre. This spring, Director and Visiting Artist, Joe Wilson, Jr. selected William Shakespeare’s Julius Caesar to be produced. Although the production was not able to be performed due to the pandemic, significant work went into the making of this show with contributions from faculty and staff, alumni, outside artists, and nearly 50 Wheaton students.

I am so proud of the ongoing work of our department to have our population reflect the diversity of who we are as America. Julius Caesar became a perfect opportunity to bring together a community of divergent racial, cultural, and socioeconomic backgrounds. Indeed, all of the students in the cast are joined together by the profound privilege of being able to attend this great college. But our students and faculty as artists are also asking individual, fundamental questions about what it means to be a citizen in this world. What responsibilities do we have to it and each other? How have I been remiss in those responsibilities? What will be the consequences of a dysfunctional political process? Julius Caesar seemed more timely than ever. The community required to put on a play is vast and diverse. But we come together each possessing the overwhelming need to see and be seen, to see our reflection and to reflect, to tell a story, or what could be called ‘a cautionary tale’. 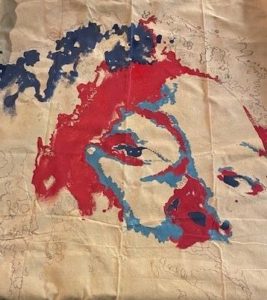 Unfinished banner of Julius Caesar, as portrayed by Krystal Ssonko ‘21 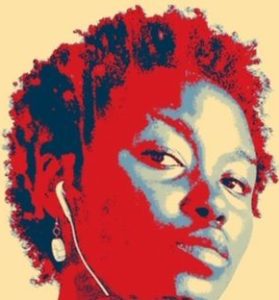 Image used as inspiration for the banner

As with any theatrical production, many brains and bodies are required to put together the seemingly infinite pieces that make up a show. Contributing to this production were students from THEA020: Rehearsal and Production, THEA302: Introduction to Lighting Design, THEA205: Stagecraft, THEA250: Costume Construction, independent studies, work study, and box office employees. In addition, leadership positions were held by students, alumni, staff, and faculty alike:

**Craig Handel’s participation was made possible by the Ruth Eddy ’42 Master Class in the Arts Endowed Fund within the Evelyn Danzig Haas ’39 Visiting Artists Program. 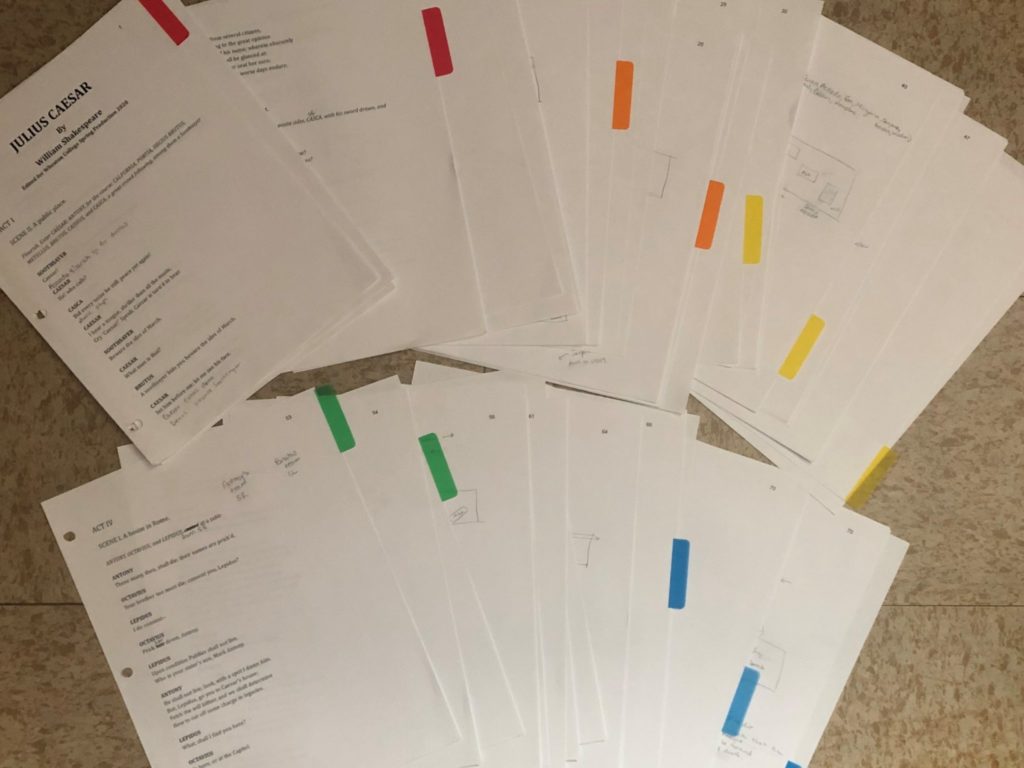 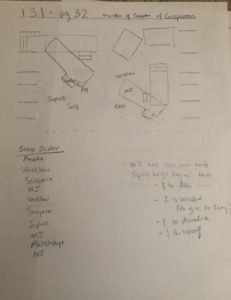 One of many pages annotating the placement of actors and set pieces on stage during the show. This particular scene had a detailed stabbing sequence.

The stage manager’s job is to provide practical and organizational support to everyone involved in the making of the production. This means that the stage manager schedules and attends all rehearsals, takes detailed notes, and later sends out a report discussing what was covered and any questions that arose. They also schedule production meetings that include the creative team mentioned above. When the show starts, the stage manager is responsible for “calling the show,” which entails communicating via headset to prompt light and sound board operators, stagehands, and others to move through the show on a technical level while staying in tandem with the actors. Above all, the stage manager is the primary communicator between all parties throughout the entire production process. The Spring 2020 production of Julius Caesar was stage managed by Sarah Maliarik (’20).

What is special about Shakespeare is that his work is immortal. His works include timeless themes such as love, hurt, war, betrayal, and power dynamics, that can be adapted into a variety of time periods, cultures, and settings while maintaining the story and message the playwright has to offer. From choosing a female Julius Caesar to adding vertical levels in the set to represent power dynamics to incorporating carefully choreographed fights, every decision was conscious and intended to support our politically-charged performance of Julius Caesar in 2020.

This is a play about revolution. —Joe Wilson, Jr.

Below is a short video of a battle sequence in rehearsal. Fight Choreography by Craig Handel.

Shakespeare remains as an example of how we have continued to examine identity, social and racial norms in terms of casting. This play required me to create an ensemble of warriors. A cast representing that part of all of us, who are at one point or another called to arms. —Joe Wilson, Jr.

Behind the scenes, costume designers draw costume renderings and build costumes for the production. While some costumes are completely homemade, others are pieced together or adapted from other shows. Costume sketches and designs by Clinton O’Dell. 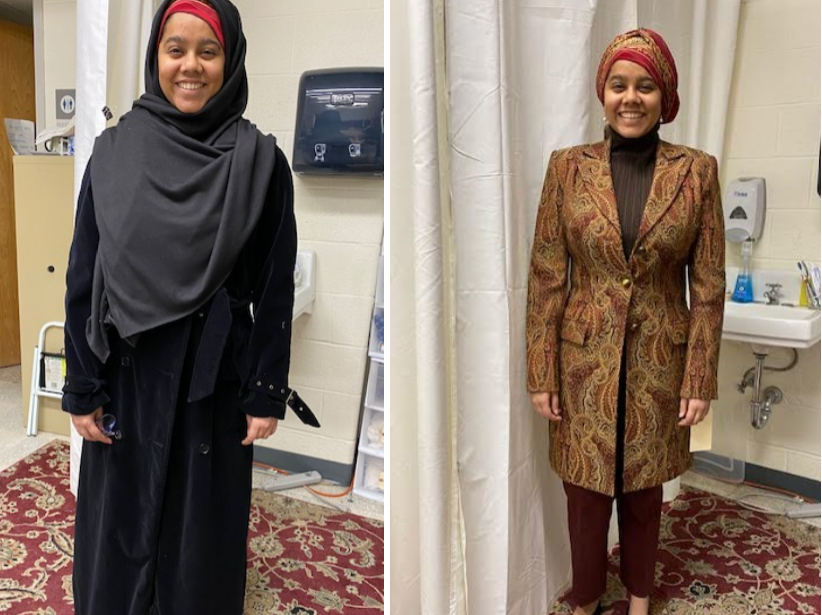 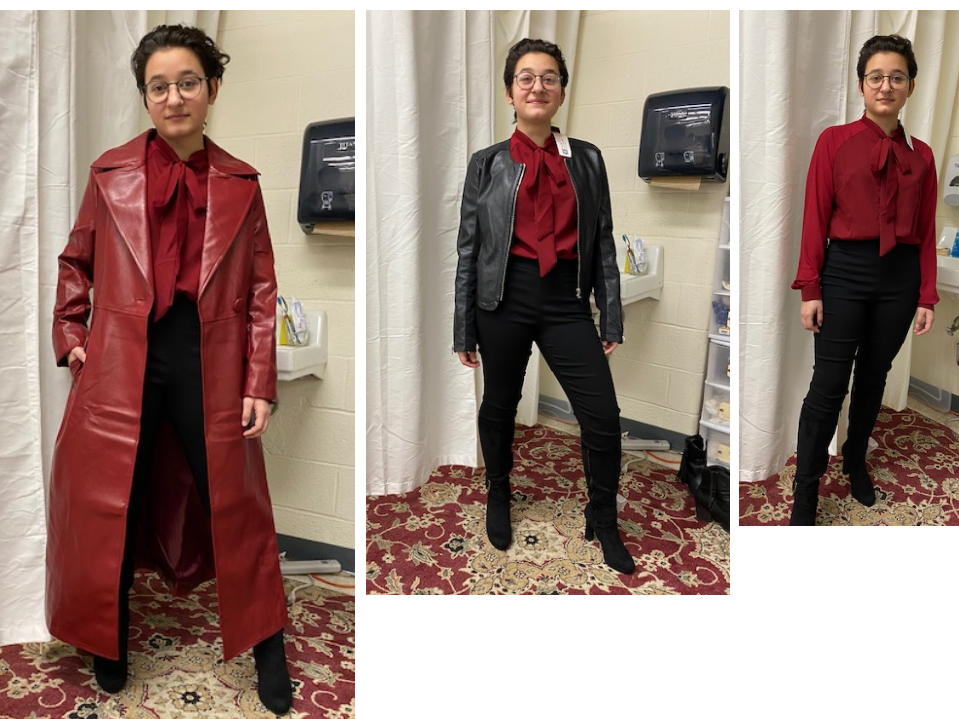 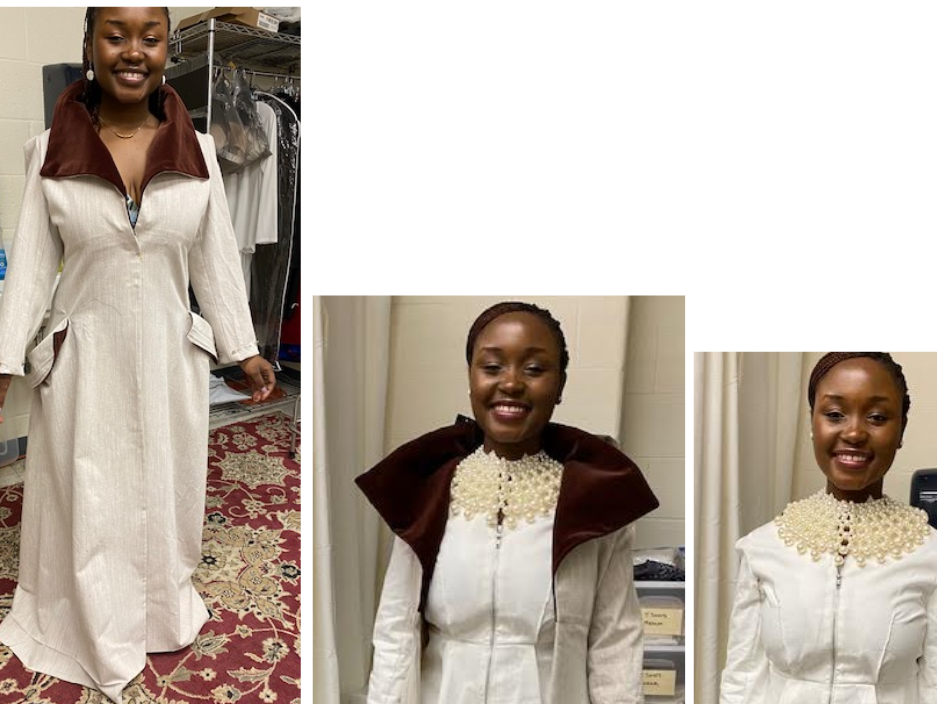 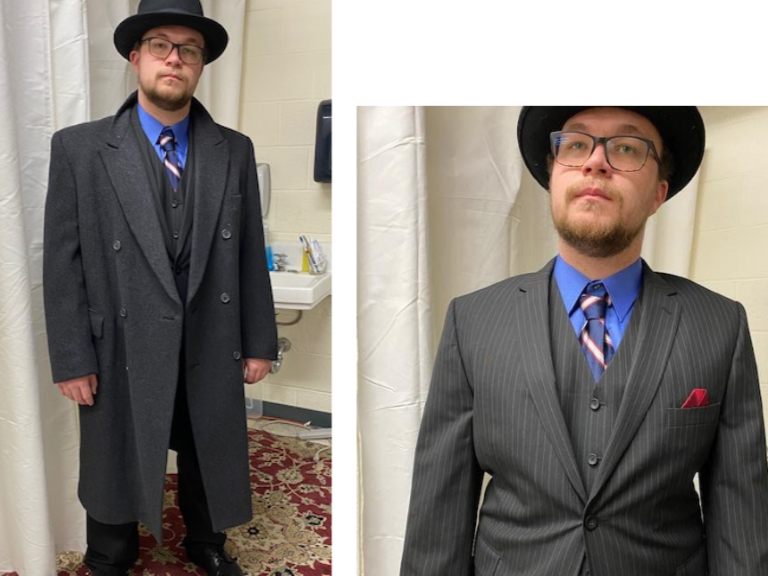 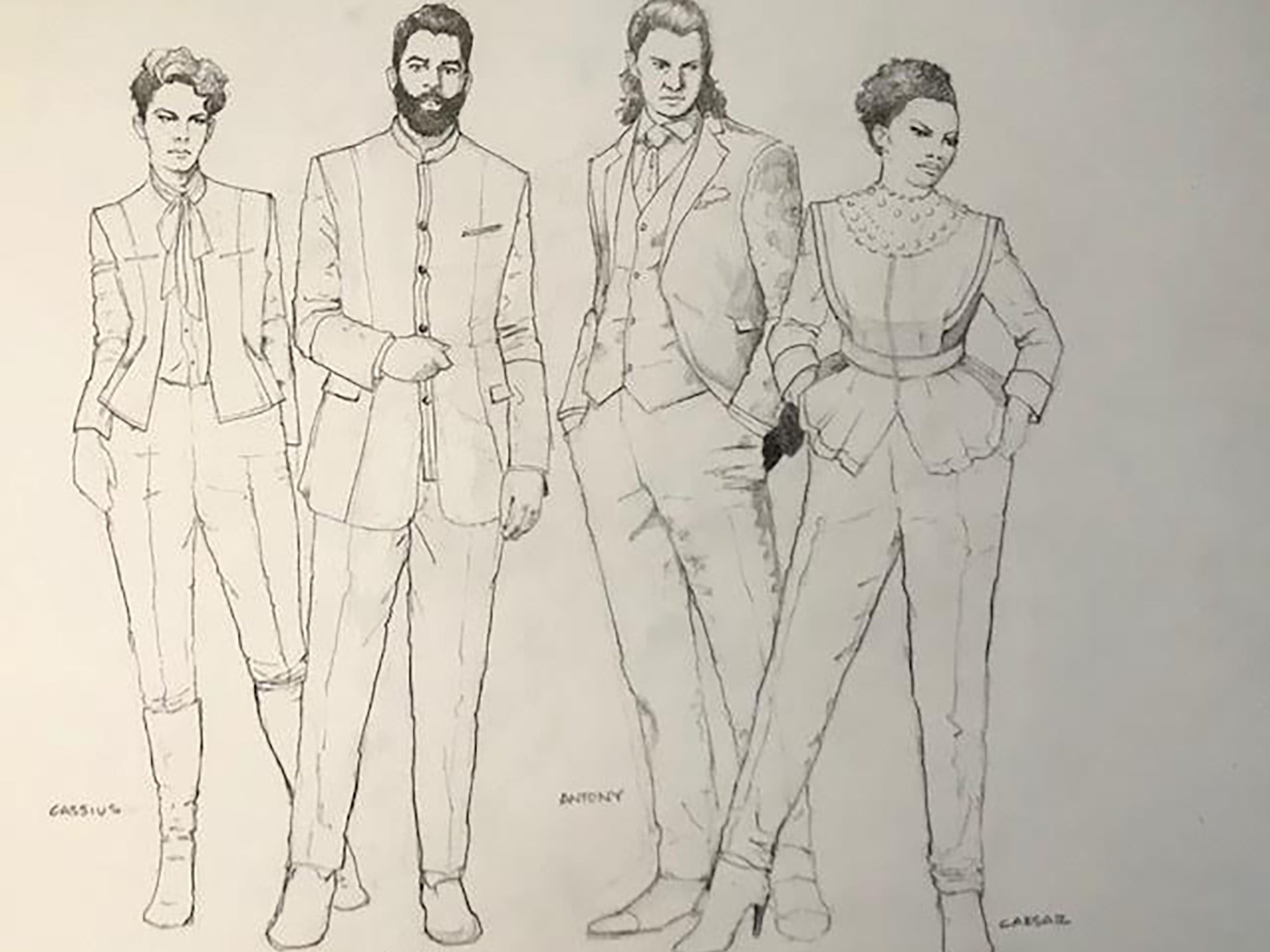 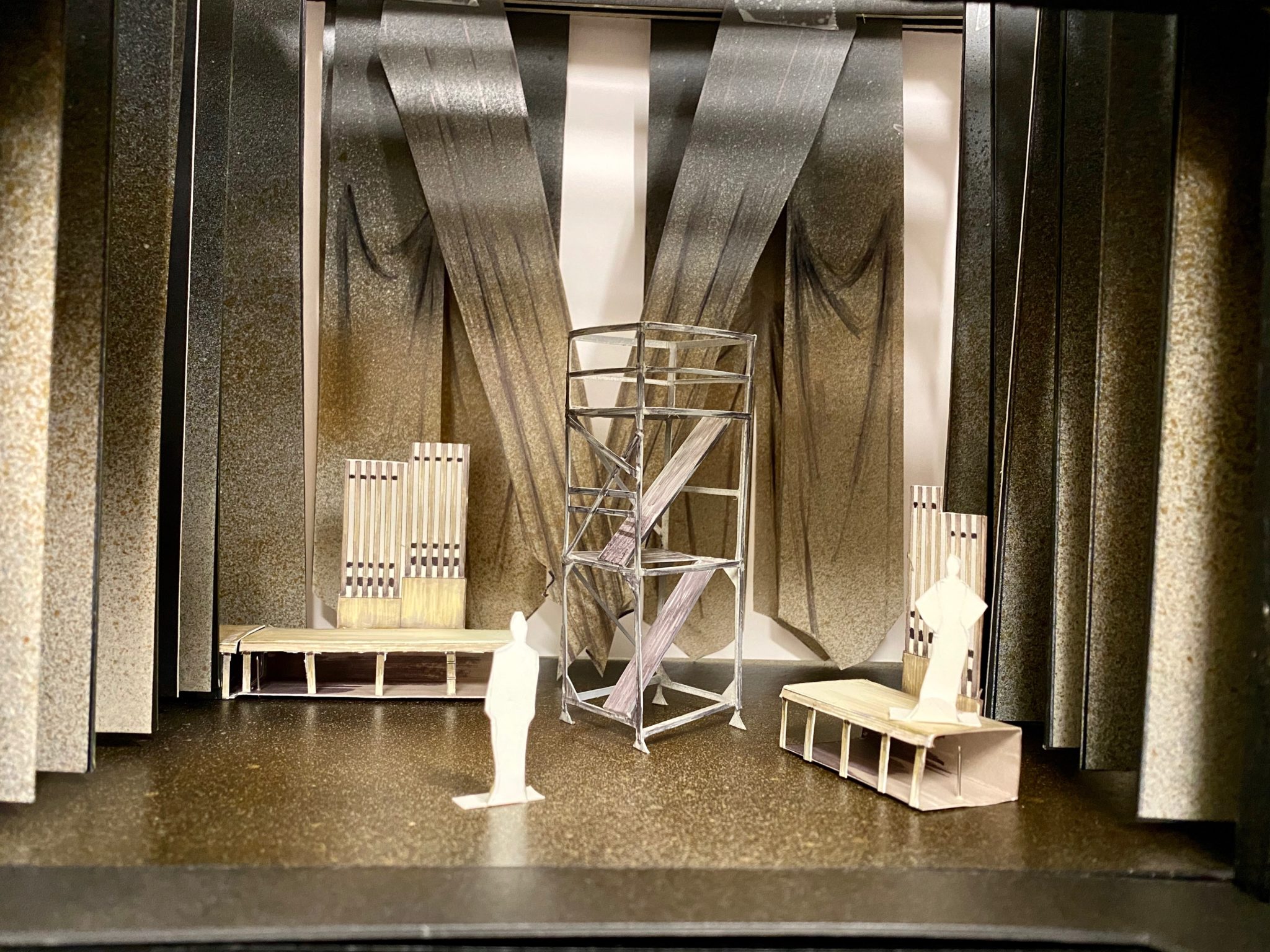 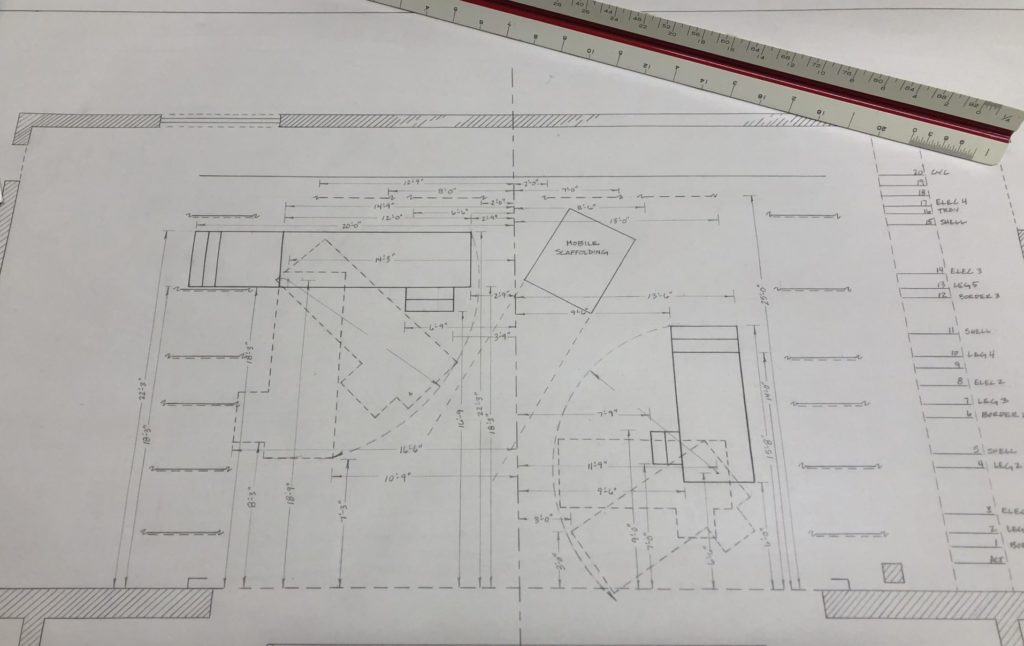 The actors, costumes, and set would not be seen without a dramatically lit stage. 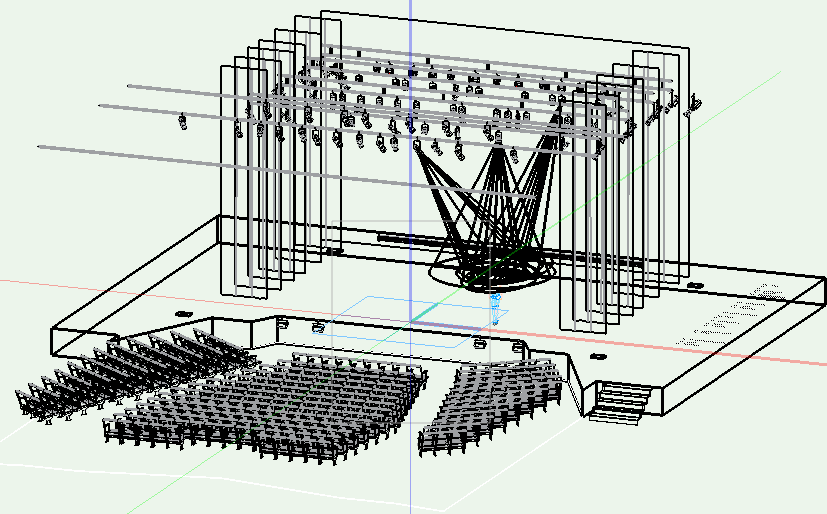 The lighting designer’s job is to isolate action happening on stage and create a mood around it. They go about this by creating a light plot, pictured below, and sometimes a 3D rendering of how the lights will look by utilizing a computer program. Both images created by Lighting Designer Taylor Kaufman (’20) 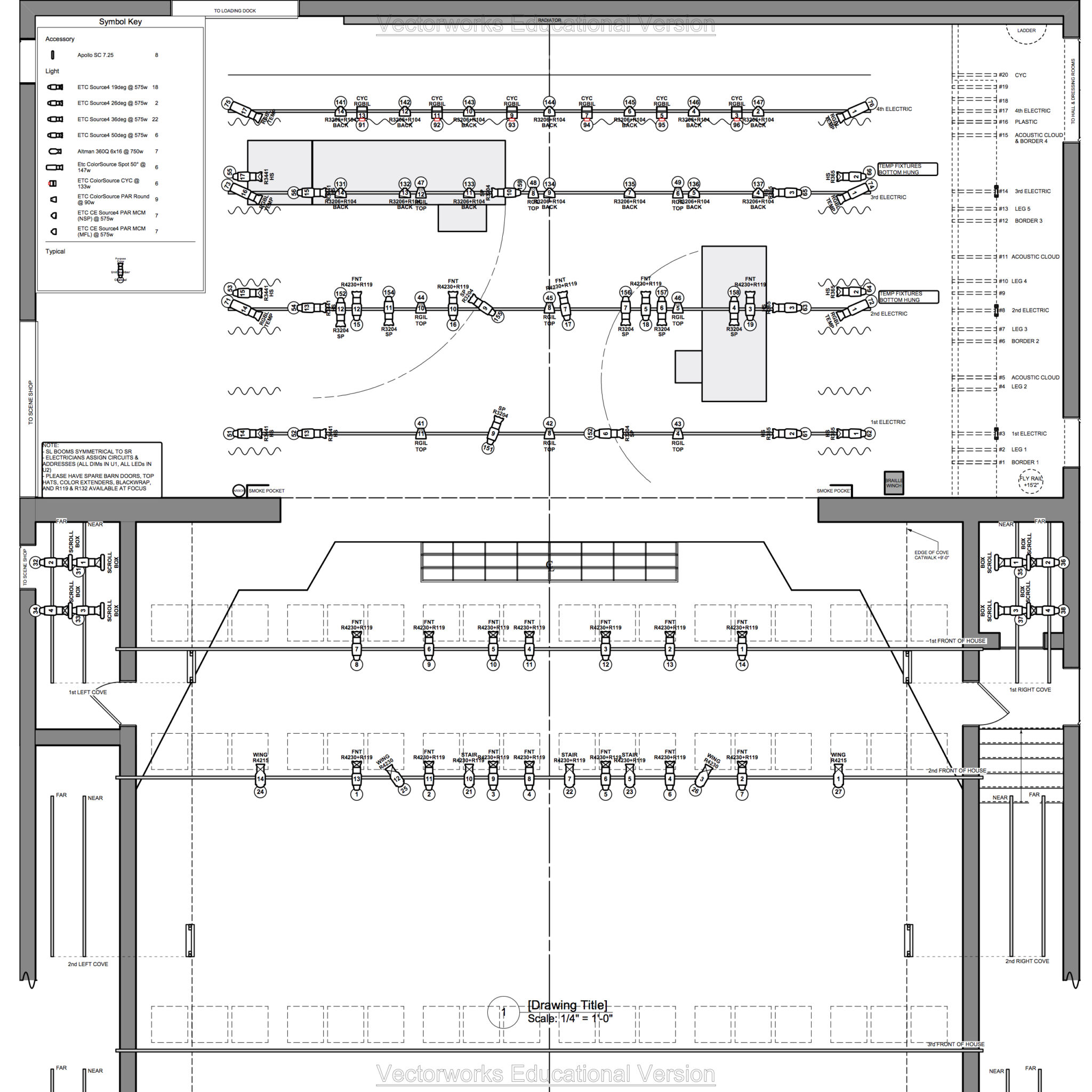 Light plot annotating lighting fixtures and positions for this production

Our cast consisted of 13 talented individuals enrolled in THEA020: Rehearsal and Production.

At the technical level, several groups of students contributed to the production.

Our production of Julius Caesar truly could not have been done without the contributions of so many individuals. Our director wants to say,