By: Dalton Adams, Class of 2021
Nominated by: Professor Joel Relihan

Most people don’t think very much about the coins in their pockets. Coins are such mundane objects that one might not realize that they are also little artistic masterpieces. They serve as pieces of propaganda, not only telling us how to view the state, but also how to envision ourselves. I, however, do think about coins. I am a numismatist.

My name is Dalton Adams, Class of 2021, and I am a Classical Civilizations major in the Classics Department. Over the past 3 years, I have been working to identify a collection of over 300 Greek and Roman coins that were donated to Wheaton College in 1983 by Rhoda A. Hendricks, Class of 1932. At the advice of Leah Niederstadt, Curator of the Permanent Collection and Associate Professor of Museum Studies and History of Art, and Joel Relihan, Professor of Classics, I made this project the subject of my honors thesis.

In my thesis, titled The Potentiality of Value: The Identification and Worth of the Hendricks Bequest within an Academic Collection, I discuss the process of identifying the coins and how that process has changed as I have learned and grown as a numismatist. I catalog every single coin with an accompanying photo. Finally, I conclude my thesis with a discussion of the future of the Hendricks Collection and the overall benefit of coins to an academic collection like the one here at Wheaton.

Spanning at least 70 cities and over 1,600 years, what this collection lacked in the quality of its coins, it made up for in their diversity. I want to share some of my favorites.

Some coins speak to us because of their simplicity. This bronze coin from Kainon, Sicily has no text, but instead has simple designs on each side. A griffin is depicted one side and a horse on the other, one mythical, one real. The griffin and horse leap in almost the same pose, visually telling us to see them as equals. What does this tell us about the Greek worldview and the construction of myth versus reality? 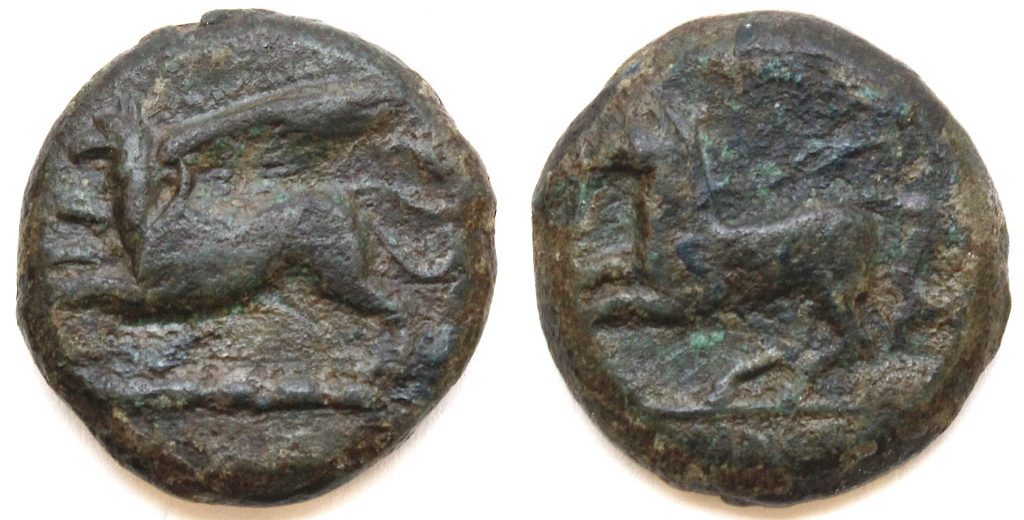 Bronze Litra of Syracuse, Sicily, Reign of the Tyrant Dionysius I

We don’t have to travel far to find more mythical creatures on Sicilian coinage. The obverse (heads side) of the coin depicts a classic Syracusan bust of Athena, goddess of wisdom and war. The reverse (tails side) depicts a hippocamp, half horse and half fish.

This is one of my favorite coins from the entire collection. This rare coin depicts the winged bronze automaton Talos, who protected Crete, as he is about to hurl a stone at some unwanted invader. The reverse shows a hound on the scent, maybe (if we let our imaginations run) scavenging whatever enemy Talos has just slain.

This might be the rarest coin in the entire Hendricks Bequest. While it does not appear very well in the photo, the letters ABY are visible on the reverse behind the seated god Apollo. This is the ethnic (city name on a coin) of Abydos. Using that information, I found the only other known example of this coin, which is housed in the Münzkabinett, the National Numismatic Collection of Berlin.

Not all coins of the Hendricks Collection come from ancient Greece, many come from Rome. This Dupondius, minted in Lugdunum, Gallia (modern-day Lyon, France), depicts Emperor Nero in great detail and stunningly high relief. Nero’s portraits are famously grotesque, accurately depicting the overweight emperor in an unflattering light.

Though this coin is worn, it is one of my favorite types among all ancient coins. The obverse features a portrait of Lucilla, second wife of Emperor Lucius Verus. The reverse depicts the goddess Fecunditas, goddess of fertility, holding an infant as a boy and girl stand about her. This is a stunning look into the (perceived) everyday lives of Roman women, especially those in the royal family. While this scene of Fecunditas does not lend us much insight into actual ideas and performances of femininity in Rome, it tells us a lot about how the emperor wanted the everyday Roman to perceive femininity.

Bronze Dirham of the Artuqids of Mardin, Reign of Nasir al-Din Artuq Arslan

While most of the coins in the Hendricks Collection are from ancient Greece and Rome, a few coins slipped in from other regions and later time periods. This coin from the early 13th Century was minted in an Islamic state in modern-day Turkey. The obverse has the bust of an unknown male figure looking directly at the viewer, and the reverse has a five-line Kufic legend (the text of a coin).

These last two coins do not come from the Hendricks Collection, but are some other coins I have worked with over the last three years.

This bronze coin minted in Alexandria, Egypt simply brings me joy. Almost everyone holds it breaks into laughter. While scale is lost in these photos, this coin weighs over 70 grams and is nearly 2 inches in diameter. To give you a sense of scale, an American quarter weighs just under 7.8 grams 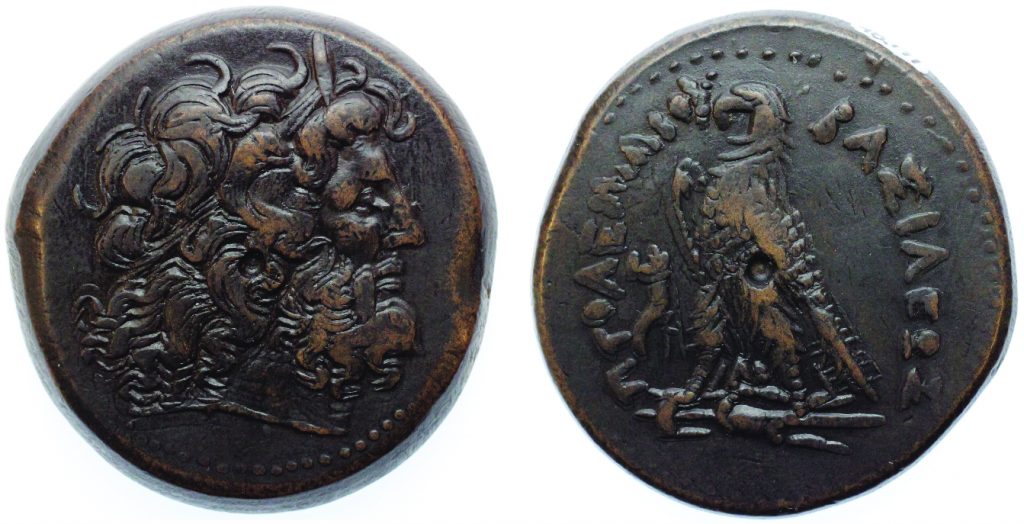 Silver Tetradrachm of Antiochus VIII & Cleopatra I of Syria

This beautiful silver coin comes from the Seleucid Empire (spanning Western Asia) and was minted at the Ake mint (modern-day Acre, Israel). The obverse depicts the jugate (side-by-side) busts of Antiochus VIII and Cleopatra I Selene of Syria, great-grandmother to Cleopatra VII (the one of Antony and Cleopatra fame). This is one of my favorite portrait styles in all of ancient coinage, and this example is absolutely stunning.

Silver Tetradrachm of Antiochus VIII and Cleopatra I of Syria, 125 BCE – 121 BCE

Finally, I want to thank everyone that has supported me over the past three years as I work on this massive project. I can’t thank you all enough.