Innovation in Wheaton College classrooms often starts with engaging with students as partners. This is the classic Wheaton for which we are remembered. The Center for Collaborative Teaching and Learning, which begins its work on campus in 2019, draws its inspiration from a long history of teaching and learning success built on transformative relationships between faculty and students.

Most recently, Professor Domingo Ledezma has partnered with Noah Cowie ‘21 to create a novel virtual reality tool to display and study Early Modern cartography in an interactive virtual reality experience. This interdisciplinary effort shows the promise of collaborative partnership for teaching and learning.

The idea for this work began in a 2017 course, New World Voyages and Explorations of Nature, where students ‘explored’ late-sixteenth century routes on the Amazon River using Google Earth VR. 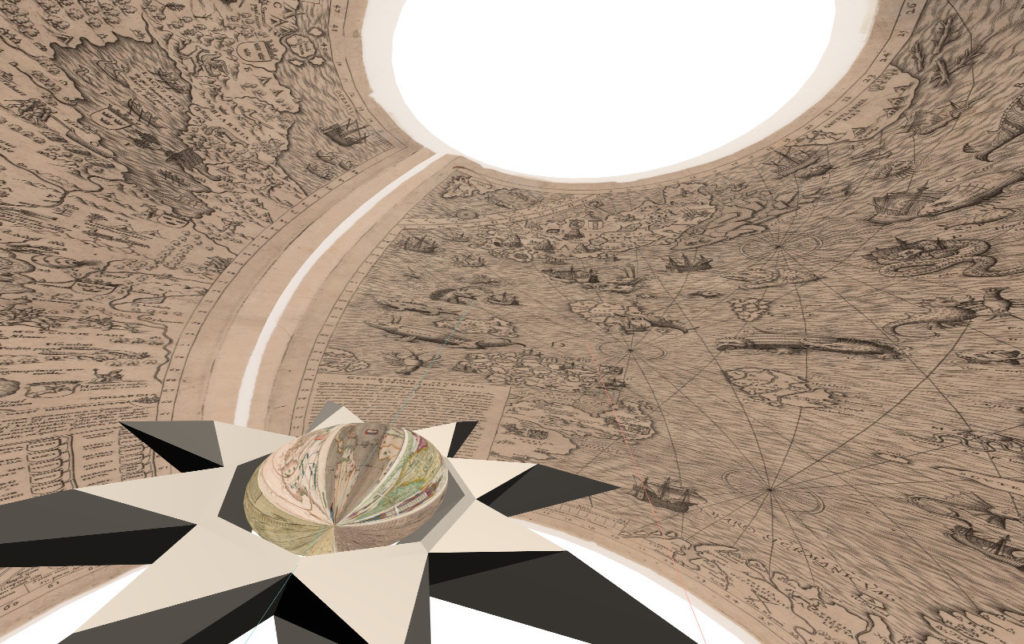 Once partnered with Cowie, Professor Ledezma’s goal was to create a VR space to study and annotate Early Modern maps inside a 3D computer-generated environment. Noah Cowie ‘21, a Computer Science and Math Major, brought his coding skills to design the VR environment Prof. Ledezma envisioned but not without first suggesting some changes!  On Cowie’s advice, they adopted open source web-based VR software, AFrame/WebVR, as their working platform and began the journey of designing a teaching and learning experience together (Cook-Sather et al. 2014, 12).

The Promise of Partnerships

Prof. Ledezma and Cowie’s work is precisely what Cook-Sather, Bovill and Felten have shown is the promise of faculty-student partnerships In Engaging Students as Partners in Learning and Teaching: to bring student insight into teaching and learning in meaningful ways that transform student and teacher.

Cowie and Ledezma’s work together has yielded a new tool that can be used in digital scholarship, enabled new venues for discussing about the nature of what we perceive as reality, and will change the way that new students will learn in Prof. Ledezma’s classroom.

Theorizing on the nature of reality and how changing technology brings us back to notions that have already been expressed in literature.  Prof Ledezma reminds us that for the Argentinian writer, Jorge Luis Borges, human creations are mere representations of a larger scales. Borges wrote in The Aleph that “the lower world is the map and mirror of the higher.” This VR experience borne of the unique partnership that takes place in our classrooms bringing Borges’ insight into a “reality” as Cowie and Prof. Ledezma now can share an inner 3D space to reflect on the semiotics of representations.

Cowie and Prof. Ledezma’s presented their VR creation: On Exactitude in Science’. Semiotics of Representation: Early Modern Maps & [Virtual] Reality, on Wednesday March 20th at 6 p.m. at an event sponsored by the CCTL, the library and the digital humanities program.