By John Grady and Karen McCormack

After the tragic shooting in Newtown last December that killed twenty children, regulating gun ownership became a topic of hot debate across the country… at least for a while anyway. At the time many commentators predicted that the interests of the gun lobby would prevail over the best efforts of reformers and they appear to have been correct. But a look at trends in gun ownership – and people’s attitudes about guns — reveals that Americans’ investment in gun ownership is steadily declining. What seems likely, therefore, is that we should expect Congress to consider – and pass — more encompassing and effective gun regulation within the next several years.

The General Social Survey (GSS) reports that gun ownership in the US has dropped steadily since the early 1970s, from more than a half (54%) of all households to a little over a third (36%) in 2012. This decline in gun ownership over time covers the entire spectrum of the population (whether by sex, race, income, or region).

Moreover, today’s youngest generation owns fewer guns than their elders. Whereas 46% of Baby-Boomers lived in a home with guns when they were 18-29, and 35% of Gen-Xers did, under a quarter (23%) of Millennials – including today’s college students — do. In fact, the group with the highest rate of gun ownership (54%) over the course of their lives is the Silent Generation, whose youngest members are already in their early seventies. With each passing year, therefore, a slowly growing proportion of Silents is being replaced by Millennials who have little interest in gun ownership. In addition, anywhere from three quarters to four out of five Americans (75-80%) have consistently told the GSS that they favor requiring gun permits and background checks for gun purchases. 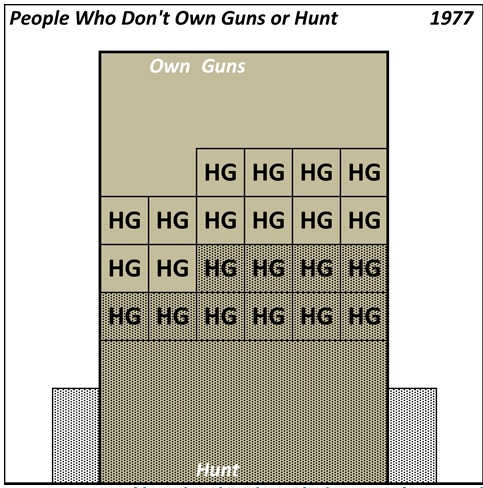 One way of imagining the proportion of the total population that is invested in the gun culture is displayed in figure 1. Everything within the perimeter of the largest square represents the total population. Those who participate in the gun culture are to be found represented in Beige (Gun Owners), cross-hatching (hunters), and cells marked HG stand for those gun owners who own handguns. The blank space represents households that neither hunt nor own guns (42%). Numbers like these suggest that it is only a matter of time before the gun lobby will have lost the popular support they rely on to block strong gun legislation.

But if opposition to rational gun legislation’s days are numbered, the GSS also reports that the commitment of those who do own guns may be hardening even as their overall numbers shrink. Handgun ownership, for example, is increasingly concentrated among those who hunt. Even though households who hunt have declined from 32% in 1977 to 20% today, they are far more likely than non-hunting households to possess handguns, which, of course, are not needed for hunting. In fact, in 1977 hunters were only twice as likely as non-hunters to have a pistol or revolver in their house. Today, almost half the hunting population possesses a handgun; four times the rate of the population that doesn’t hunt. 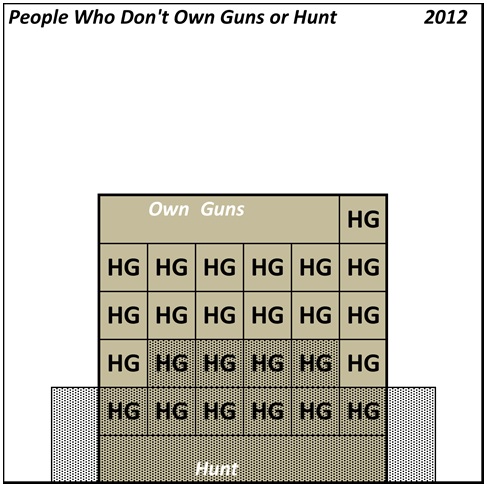 Comparing figures 1 and 2 clearly shows this process. Note that the blank space has grown to three out of five households (60%) but also how prevalent handgun ownership has become within the gun culture.

These changes suggest that those who do own guns are increasingly conflating recreational and economic pursuits with more gut level concerns about self-defense. It should be noted that if possessing handguns is correlated with concern about personal safety then this is a puzzling trend as the last two decades have witnessed a dramatic long-term decline in both crime and personal violence in America.

In the long run increased gun regulations appear to be inevitable. Unfortunately, the debate that pits gun rights against government regulation should become even more rancorous as the gun lobby’s base shrinks and its power wanes. So we should expect a great deal more bitterness before the issue is finally resolved. (Remember the ferocious resistance to the Civil Rights movement!) But, as always, we should not mistake the volume of dissent for the opinion of the majority.