The Evolving Linkages between Parenthood and Marriage

Like Jesus or Wonder-bread, marriage – and more specifically, marriage characterized by cozy, picket-fence domesticity – is deeply woven into American life and consciousness. Few traditions are as discussed and disputed; few are so loathed and so loved.

While marriage retains its significance, even if only symbolically, among Americans today, the institution itself is evolving, and rapid social and demographic changes are to blame. What once so forcefully organized American life no longer does, and arguably has not for several decades. As a consequence, marriage has become no stranger to national debate, in which we bemoan out-of-wedlock births, skyrocketing divorce and premarital sex, and wax rhapsodic about the good ol’ days – when men were men, women were women and marriage was just how things were done. At the crux of this debate is the question of whether marriage is ostensibly suited for the modern age, or whether it sits at the threshold of insignificance. And at the crux of this, like most issues, is fear – of change, of the future, of becoming irrelevant, of shifts in power.

As far as reproduction goes, marriage has seen a dramatic shift. Americans postpone marriage, and live in their parents’ homes, with friends, or with unmarried partners. More Americans live together without getting married, either as a precursor to marriage or an alternative to living alone; these alternatives make marriage less central to domestic life. Divorce is, as I wrote earlier, ‘skyrocketing’, as are births to un-married mothers, leaving more households headed by single parents. More women participate in the labor force, leading to a decline in the prevalence of ‘traditional’ one wage-earner, two-parent families. Americans are, since the advent of reliable and effective birth control, able to control their fertility, and do not have to choose between abstinence and unplanned pregnancy. Americans are also increasingly tolerant of gay marriage. All of these demographic and behavioral trends can inform how we make sense of marriage.

We can look at demographic trends to make sense of patterns, and to declare in which direction we think the country is shifting, both behaviorally and attitudinally (which do not always correlate). The following two examples illustrate these trends. 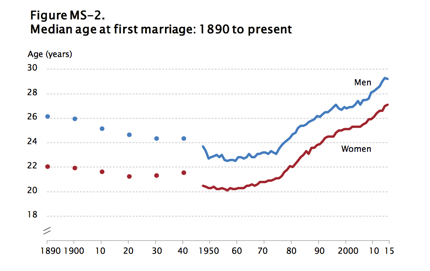 Trends in age at first marriage for men and women in the USA, 1890-2014.
Source: US Census Bureau

First, today, men on average marry at 29, while women marry at 27. This is a seismic shift, compared with 23 and 20 in 1950 for men and women respectively. That men and women are marrying older may indicate a reduced urgency to produce children quickly and en masse. This does not necessarily indicate that married couples are eschewing children altogether. Rather, opting to marry even at an age when biological fertility in women is reduced indicates that such unions are entered into for reasons other than procreation.

Second, a growing plurality of Americans not only agree, but also identify, as “strongly in favor” of gay couples’ right to enter into marital unions, a right previously only enjoyed by heterosexual couples. This indicates that a preponderance of Americans is progressively amenable to changes in marriage as it is traditionally defined and structured. This of course means that for many Americans, a fertility-based explanation of marriage is no longer the only legitimate one.

Also important to consider is the history. For example, absolutely singular to this discussion, at least as far as parenthood is concerned, is understanding birth control and its effect on American society.

According to Stephen Nock, “the centrality of marriage in American culture can be understood, in part, as a consequence of poorly controlled fertility”. Before the advent of effective and reliable contraception, children were an almost unavoidable byproduct of sex. Consideration of this possibility was, as a consequence, a large part of navigating intimate relationships, in that marriage functioned as a partnership that allocated responsibility for offspring. It is for this reason that communities have attempted to regulate adultery and illegitimacy: if children are not born to two parents, responsibility cannot so neatly be designated, sometimes creating, in Stephen Nock’s words, “collective obligations for the care of offspring”. Because of potential public consequences, sex has never been solely in the purview of individuals. Birth control, however, stripped sex of (previously inevitable) reproductive outcomes, and in doing so, allowed sex to be just that: sex.

Once sex was uncoupled from fertility, emphasis on parenthood and marriage as building blocs of social order decreased. If the circumstances through which one entered into parenthood could be controlled, so too could the circumstances through which one entered into marriage. Advances technology and law, together with changes in culture (namely the weakening of social norms that vilified premarital sex and out-of-wedlock child rearing) allowed young people to delay union formation without having to choose between abstinence and unplanned pregnancy.

Ultimately, America appears to be shifting away from traditional marriage – but it’s up to us to determine if that’s necessarily a social problem, and if it is, whether it’s one we can – or should – fix.