Jesse Gelsinger was the first person publicly identified as having died during a clinical trial for gene therapy. He was eighteen and living with an X-linked genetic disease of the liver, with symptoms that included the inability to metabolize ammonia- a byproduct of protein breakdown. On September 13th, 1999, Jesse was injected with an adenoviral vector (a specific type of virus), which carried the normal gene. Four days later, he died from a massive immune response triggered by the viral vector. His body perceived the virus carrying the new gene to be a threat and therefore began attacking itself, eventually causing organ failure.

Terrible events like Jesse’s death, however, have not slowed the pace of medical innovation as physicians rely more on machines and computers and less on what they learned in school. America may be home to the world’s finest doctors and medical facilities, but with the introduction of robots into the medical system, it is becoming more common for surgeries and exams to be done by machine rather than actual surgeons and physicians. In some cases a doctor may even be replaced with a robot that has a monitor connecting the patient to a physician in another country. Health care specialists increasingly believe that advanced research in medicine is helping us find cures for diseases that were once guaranteed to result in death. 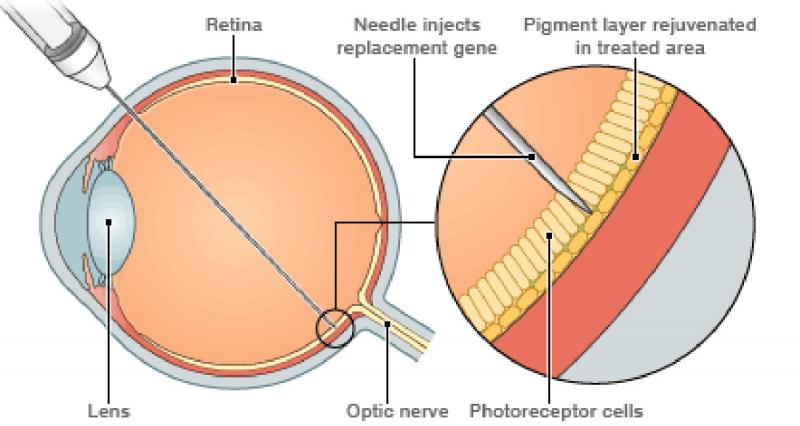 Technique of replacing defective gene in the retina of the eye.

Gene therapy, which replaces diseased or mutated genes with normal genes, is at the edge of one of these new technological frontiers. It works by introducing new, healthier, genes into the body through the injection of a virus. Not surprisingly, increased research on the use of therapies like this has frequently raised concerns that doctors have gone too far and are “playing God,” because altering our genetic material is against God’s will. Even many people who are not religious also are worried about the possible misuse of gene therapy. For example, a couple aware of their genetic makeup may decide not to have children in order to avoid passing on a defective gene, even if the likelihood of that happening is small. Even more troubling for many is the idea that people might try to use gene therapy to “design” a perfect baby.

In order for the new gene to be effective in the body, it must be delivered using a virus. This procedure usually involves inserting a normal or slightly modified version of a normal gene sequence into a virus. The virus will then carry the gene through the patient’s body to the targeted tissue. Gene therapy has had some successes, especially in the treatment of muscular dystrophy. Nevertheless, there is always a risk that a patient’s immune system may reject the inserted virus as an intruder and, in a worst case scenario, kill the patient. So why is it still being done?

Think about it for a moment. If the same concern that had been raised about immunization and surgery at the turn of the last century had encouraged doctors not to pursue medical research, we would still be relying on the same technology and medical treatments that were prevalent at that time. We would not have vaccines for smallpox, polio, or chicken pox; penicillin would never have been discovered, and the average life expectancy in the U.S. would be half of what it is today. Most of us who are living right now would not have the luxury of debating what was natural, and what was not.

It has to be acknowledged that there are many risks with gene therapy and that our understanding of what is involved in the process is just in its infancy. But we should not be surprised when these problems are solved after more research and trials. After all, every therapy has inevitably been riskier and more perilous in the early stages of its development. All surgery was more dangerous in the past and vaccines were less effective, and had more side effects. It’s a hard truth but improvements in medical treatment require lots of trial and error and practice.  Sooner or later, all promising research requires risky clinical trials and, without them, there would be no medical progress. There is a lot at stake with gene therapy, quite apart from its risks. Most of our current surgical, radiological and drug therapies contain diseases by reducing their impact on those afflicted. Gene therapy, in contrast, offers the hope of removing the disease completely.