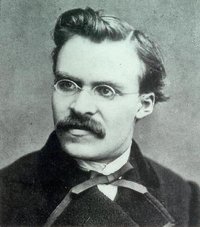 Students in Professor Partridge’s 19th C. Continental Philosophy Course attended a talk by Daniel Conway of Texas A&M University on April 24th, 2012 hosted by the Philosophy and Political Science Departments at the University of Massachusetts Boston.  “How the Story Ends: Reading Nietzsche’s Genealogy of Morality” offered a provocative interpretation of GM III:27.  Conway argued that Nietzsche “campaigns to cultivate a target audience possessed of virtues that are not typically associated with his philosophy: receptivity, submission, and hospitality.  The possession of these virtues not only qualifies his target audience to bring Christian morality to a timely close, but also accounts for the hopefulness that informs his vision of an extra-moral, post-theistic future for humankind.”